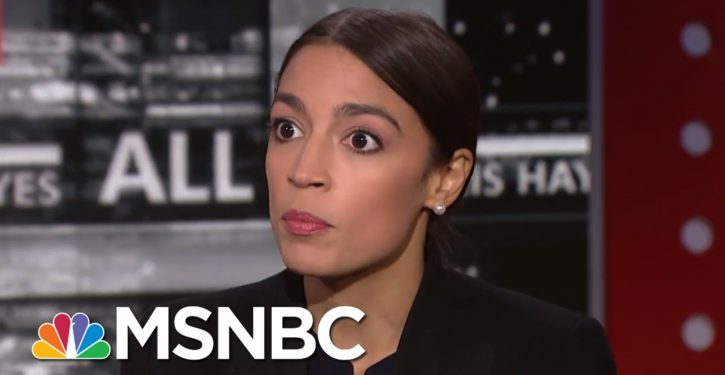 [Ed. – Like other far-left Dems, she sees the world through grievance-colored glasses.]

Rep. Alexandria Ocasio-Cortez was schooled by an FBI counterterrorism official earlier this week after she incorrectly suggested Muslims get charged with terrorism because they are treated as foreign, while white supremacists get “off the hook.”

The New York Democrat used a hearing on Tuesday to suggest that Muslims are being treated differently in the U.S. … while white supremacist attackers avoid being charged with “domestic terrorism” for similar crimes.

Michael McGarrity, the assistant director of the Counterterrorism Division of the FBI, fired back at the freshman Democrat, explaining that the authorities can’t charge people with a “domestic terrorism” charge simply because such a charge does not exist in U.S. laws.

“You’re using the word ‘charge,’ as I said before there’s no domestic terrorism charge like 18 USC § 2339 ABCD for a foreign terrorist organization,” McGarrity explained. “What we do both on the international terrorism side with the homegrown violent extremists and domestic terrorism, we’ll use any tool in the toolkit to arrest them,” McGarrity said.

A little perspective on Michael Flynn’s ‘Lock her up!’ chant
Next Post
Schumer mocks Trump: ‘I’m sure we won’t be hearing any more’ about illegal immigration