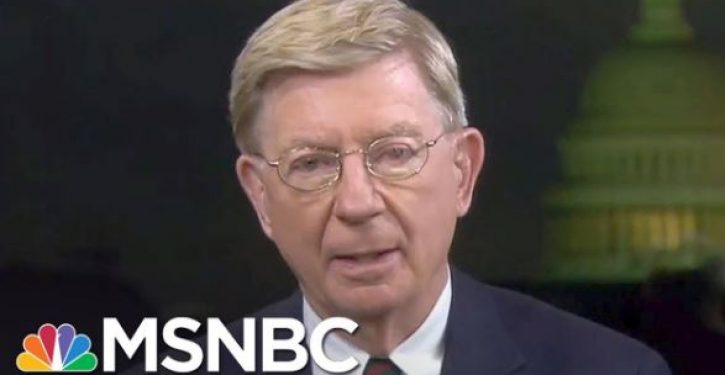 [Ed. – Another veteran conservative commentator who has lost his mind.]

Long-time conservative commentator George Will said on MSNBC Wednesday that the GOP has “become a cult,” when asked if Republicans have become the party of Trump.

The former Republican is on a book tour touting his new title “The Conservative Sensibility,” which was released Tuesday.

“It has become a cult because of an absence of ideas,” he said. “Because they have jettisoned the ideas for years, decades … all the 20th century almost … conservatives said we’re for free trade. Trump said, ‘By the way, you’re not anymore.’ And they said, ‘OK, we’re not for free trade anymore.’ Or they pretend to be.”

MSNBC anchor Stephanie Ruhle introduced Will in the segment saying, “George Will, who has been defining what it means to be a conservative since the 1970s writes about this identity struggle in his new book ‘The Conservative Sensibility.’ And George, is there a struggle?”