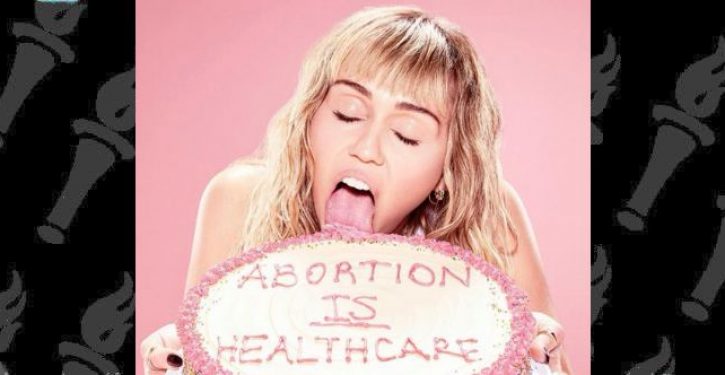 On Tuesday, musician Miley Cyrus teamed up with Marc Jacobs to promote abortion and pump money into taxpayer-funded abortion mill Planned Parenthood with raunchy images of the 26-year-old and sweatshirt sales.

In one photo, Cyrus has peeled grapefruits covering her nipples in a topless photo; the image is plastered on a Marc Jacobs hoodie, accompanied with the text, “Don’t f*** with my freedom.” According to the clothing company, 100% of the hoodie proceeds will be dumped into Planned Parenthood, an organization that kills some 320,000 unborn babies a year.

In another photo, Cyrus is seductively licking the icing off a cake which reads, “Abortion is healthcare” — a popular pro-abortion mantra that makes just as much sense as “murder is healthcare.”

The absurd photos sparked mockery from pro-lifers, but they also surfaced an accusation of design theft from a fellow pro-abortion feminist.

A D.C.-area baker known as “the sweet feminist” blasted Cyrus via Instagram for allegedly stealing her cake design.