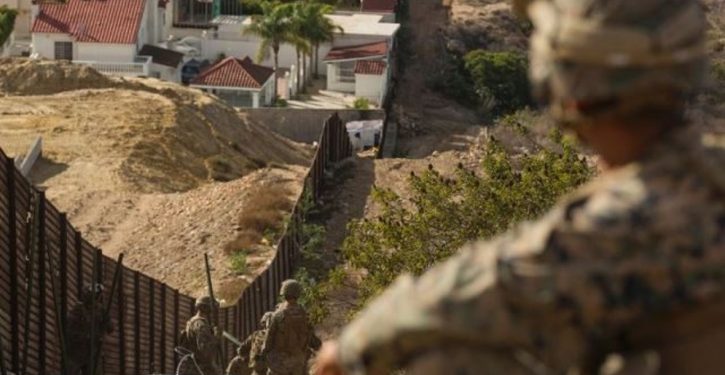 U.S. Marines on the border. USMC via Brendan Mullin, Breitbart

[Ed. – The Pentagon has confirmed being aware of the incident.]

Trusted sources working under the umbrella of CBP and the DOD told Breitbart News that a group of three unknown individuals approached a Mobile Surveillance Camera (MSC) vehicle, opened the door, and attempted to pull the Marine from the vehicle. The Marine pulled his firearm and fired one shot during a struggle with an attacker, according to a source and an official document obtained by Breitbart News.

The Marine was patrolling the border in the El Centro Sector, Station Zone 2, on May 29 when the vehicle developed a problem with the surveillance display. The scene was roughly 7.5 miles from the U.S.-Mexico Border. A Border Patrol agent working with the two Marines directed one of the Marines to go with him for assistance. The second Marine waited with the vehicle. While he waited, the Marine was approached by a group of three unknown individuals. One of the three reportedly opened the door to the vehicle and attempted to take control of the Marine’s sidearm. During the struggle, the Marine fired his pistol one time, striking the forward-looking infrared display unit mounted on the dash. The attackers fled at that point.