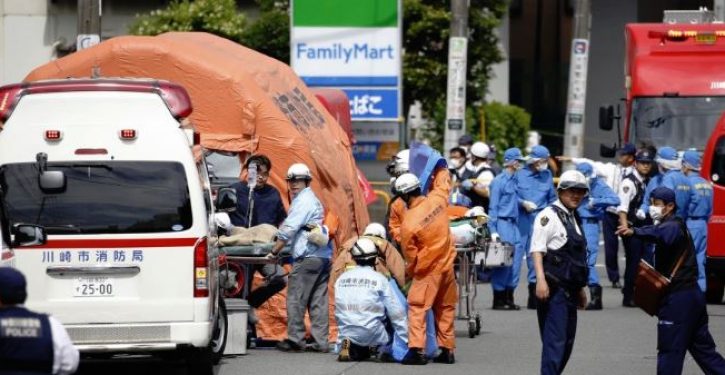 [Ed. – More insanity, this time from halfway around the globe.]

Sixteen pupils and two parents waiting with them for their school bus were stabbed by a man wielding knives in Kawasaki near Tokyo on Tuesday morning, leaving a girl and a man dead, police and school officials said.

The 16 schoolgirls, pupils of Caritas elementary school, a private Catholic school in the city, were attacked by the suspect, identified by police as 51-year-old Kawasaki resident Ryuichi Iwasaki, who was holding knives in both hands.

Iwasaki died in hospital as a result of a self-inflicted stab wound to the neck, police said.

A boy also sustained minor injuries in the attack, they added.

The incident occurred at around 7:40 a.m. on a street near a park in a residential area, about 250 meters from Noborito Station on East Japan Railway Co.’s Nambu Line and Odakyu Electric Railway Co.’s Odakyu Odawara Line.

Officials of the school, which provides eight morning shuttle buses for pupils between the station and the school, said the attack occurred as pupils were waiting for the fifth bus.

Ilhan Omar’s answer to combating Islamic terrorism? Compassion
Next Post
According to the NYC schools chancellor, whites aren’t the only beneficiaries of white privilege