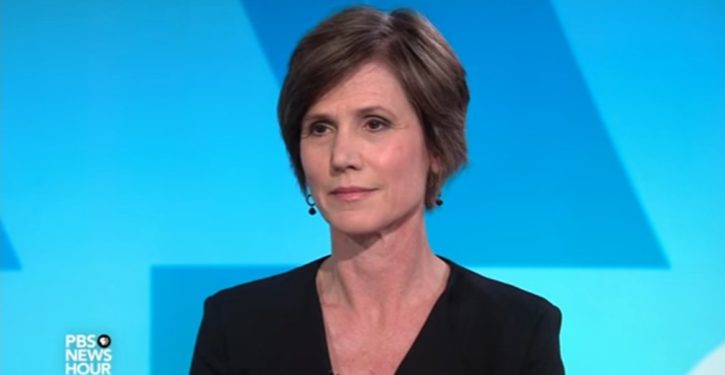 [Ed. – Sounds as though she is confessing to prosecutorial ineptitude.]

Being president is what saves President Trump from being indicted for obstruction of justice, former Deputy Attorney General Sally Yates said Sunday.

On NBC’s “Meet the Press,” Yates said if the Office of Legal Counsel hadn’t determined that sitting presidents can’t be indicted, Trump would likely have faced charges stemming from the findings in special counsel Robert Mueller’s 448-page report released this month.

“I have been a prosecutor for nearly 30 years. I can tell you I personally prosecuted obstruction cases on far, far less evidence than this,” Yates said. “And, yes, I believe if he were not the president of the United States, he would likely be indicted on obstruction.”

Although she said Mueller provides legal defenses for some of the potential acts of obstruction in the report, Yates added that “there are several incidents that he described to which special counsel Mueller really couldn’t point to significant or factual legal defenses.”