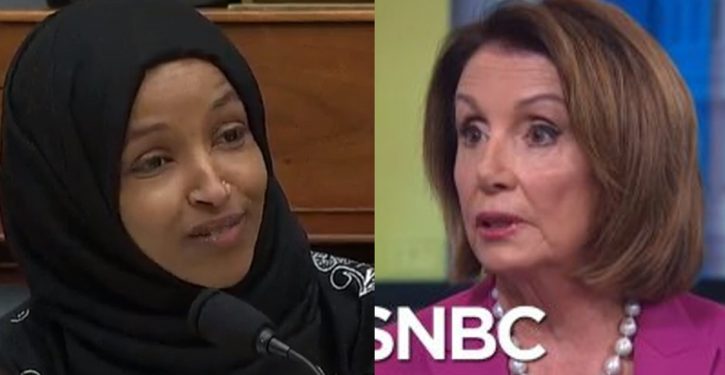 [Ed. – A smidgen of corruption, either]

House Speaker Nancy Pelosi says the Democratic Party does not have a “taint” of anti-Semitism, adding that President Donald Trump is wrong to make such accusations.

“We have no taint of that in the Democratic Party, and just because they want to accuse somebody of that doesn’t mean … that we take that bait,” Pelosi said Tuesday an interviewwith CNN in Dublin, Ireland.

Pelosi’s comments come as Minnesota Democratic Rep. Ilhan Omar is under fire for reportedly making multiple anti-Semitic comments. Omar also recently described the 9/11 terror attacks as “Some People Did Something.” Pelosi said she still hasn’t spoken to Omar about the comment.

“I haven’t had a chance to speak with her. I’m traveling, she’s traveling. But we couldn’t catch up with her. Until I talk to somebody, I don’t even know what was said,” Pelosi said. “But I do know what the President did was not right.”