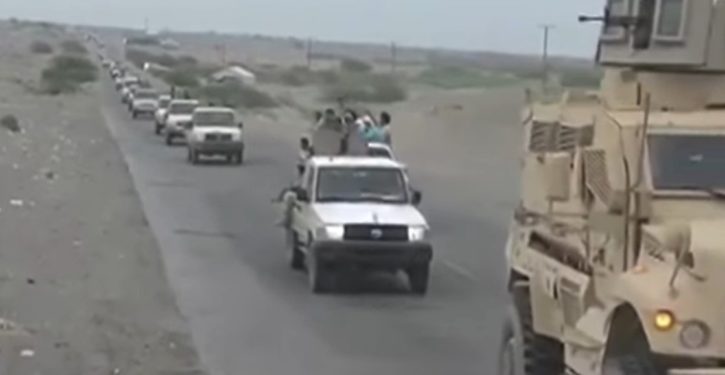 Troops from the Saudi-led coalition head toward the port city of Hodeidah in June 2018. (Image: Screen grab of Al Jazeera video, YouTube)

[Ed. – The right thing. Congress is wrong on this: the problem in Yemen is Iran, and the problem Iran creates is a threat to both Saudi and U.S. interests. The Saudis are defending themselves and a region free of predatory Iranian military posturing. It’s a positive good that they’re taking action and not asking the U.S. to do all the work. There are plenty of things to criticize the Saudis for, but taking the lead in Yemen is not one of them. – J.E.]

President Trump on Tuesday vetoed a joint resolution calling on the U.S. to end military assistance to Saudi-led forces fighting in Yemen’s ongoing civil war, calling it “an unnecessary, dangerous attempt to weaken my constitutional authorities, endangering the lives of American citizens and brave service members, both today and in the future.”

It was just the second veto of Trump’s presidency and Congress lacks the votes to override him.

Both houses of Congress had invoked the War Powers Resolution of 1973 in a bid to end American involvement in the conflict, which has raged in the Middle Eastern country since 2015.