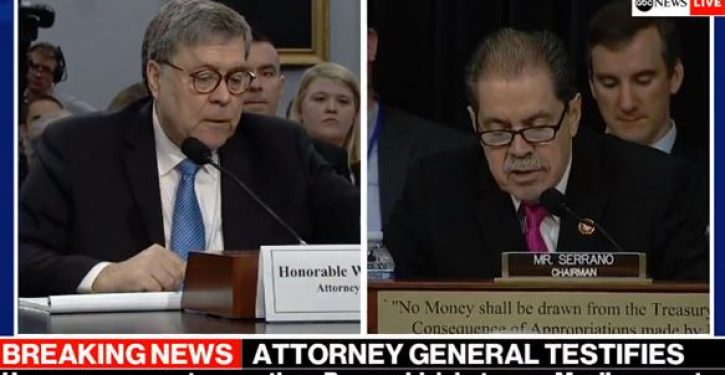 We’re all just in a holding pattern until the redacted report is released, which will evidently happen “within a week,” in keeping with the Attorney General’s previously-stated timeline of mid-April. In the meantime, we’re hungry for any little tidbits to analyze, hence the heavy coverage of anonymous, secondhand quotes from “associates” of vaguely-described Mueller investigators last week.  Now we have our latest thumb-twiddling fascination.

Appearing before a Congressional committee on the subject of the DOJ’s budget this morning, AG Bill Bar [sic] was unsurprisingly asked about the Mueller report.  Besides reiterating his time frame, Barr mentioned that he offered the Special Counsel’s office an opportunity to review his original four-page memo summarizing the full report’s “bottom line” findings (the overall nature of which were apparently known within certain DOJ circles for weeks).  Mueller’s team apparently declined. …

I suppose this is somewhat intriguing, given the Special Counsel’s office known involvement in the redaction process.  Mueller and colleagues didn’t just hand the report off to DOJ and leave for vacation; they’re assisting in the document’s scrubbing to ensure that certain sensitive material isn’t made public.

Beto over? After a stellar start, O’Rourke campaign falters
Next Post
2 children, 4 others shot outside baby shower in possible gang violence in Chicago