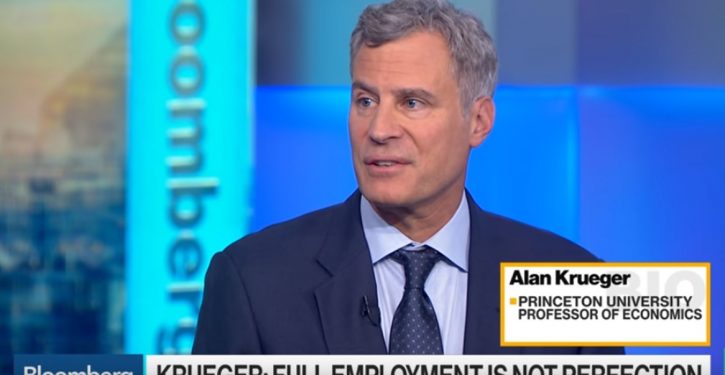 [Ed. – What an awful thing.  We offer our sincere sympathies to his family and friends.  R.I.P.  To any who are facing the anguish of suicidal thoughts or depression, please call the national suicide prevention hotline at 1-800-273-8255. There are many people who care and want to help.]

The suicide of Alan Krueger, a former Obama and Clinton adviser who killed himself this weekend, has shocked the worlds of politics and business where he was universally revered.

Krueger, 58, had a new book coming out in June and was still a member of faculty at Princeton University in New Jersey.

He lived at home with his wife Lisa, with whom he has two children, Benjamin, 28, and Sydney, 26. He is survived by them, his elderly parents and siblings. …

Krueger was best known for his groundbreaking research into minimum wage and the effect it had on labor. …

After serving as a Labor Department economist under President Bill Clinton, Krueger worked for President Barack Obama as a top Treasury official and then as chairman of the Council of Economic Advisers from 2011 to 2013.

Beto once pranked his wife by putting baby poop in a bowl and telling her it was avocado
Next Post
Court docs: Mueller was investigating Michael Cohen while Cohen was the president’s lawyer