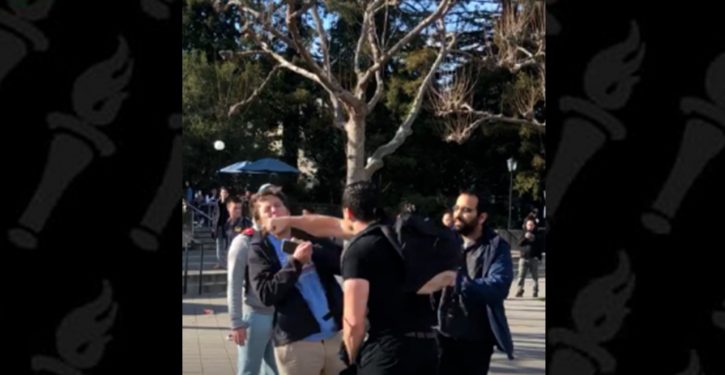 [Ed. – So they they know who the guy is.  And if it’s the campus police seeking the warrant, that presumably means he is connected with the university, even if he’s not a student. (An earlier report indicated the campus authorities didn’t think the attacker was a student.)  Apparently, UCPD hasn’t disclosed his identity.]

The University of California-Berkeley told Campus Reform Tuesday that it is seeking a felony arrest warrant from the Alameda County District Attorney’s Office as a result of its investigation into the Feb. 19 assault against Leadership Institute Field Representative Hayden Williams.

“The University of California Police Department (UCPD) has concluded its investigation into the February 19th assault on the UC Berkeley campus. Based on the results of that investigation, the department is seeking a felony warrant from the Alameda County District Attorney for the identified suspect. The District Attorney will evaluate the case. If the warrant is issued, UCPD will immediately pursue the suspect’s arrest,” UC-Berkeley Assistant Vice Chancellor Dan Mogulof told Campus Reform.