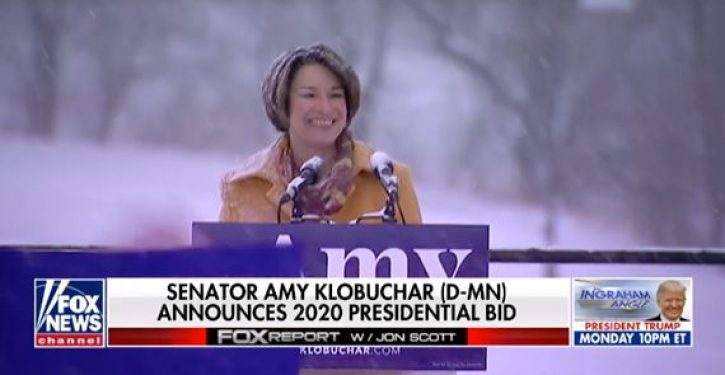 [Ed. – That should play well in a country that remains center-right.]

Sen. Amy Klobuchar is highlighting her work bridging the political divide as she embarks on a 2020 presidential campaign – just don’t call her a “moderate.”

The day after the Minnesota Democrat declared her candidacy, she pushed back against the label, telling Rachel Maddow, “I think [voters] should see me as a progressive because I believe in progress and I have worked towards progress my whole life.”

The senator then touted a litany of “progressive” accomplishments during her years in Washington and at the state level.

The response underscored how even those candidates considered within the party’s center-left are reluctant to be seen as somehow ignoring the wishes of the – vocal and influential – liberal base. The label “moderate” is scorned, avoided as a potentially fatal term in a primary campaign stacked with left-wing heavyweights like Sens. Elizabeth Warren of Massachusetts, Kamala Harris of California and Cory Booker of New Jersey, who speak glowingly of big-government policies like the Green New Deal. Most recently, populist firebrand Sen. Bernie Sanders of Vermont on Tuesday launched his second straight bid for the Democratic nomination. And progressive champions Sens. Sherrod Brown of Ohio and Jeff Merkley of Oregon may soon join the 2020 melee.