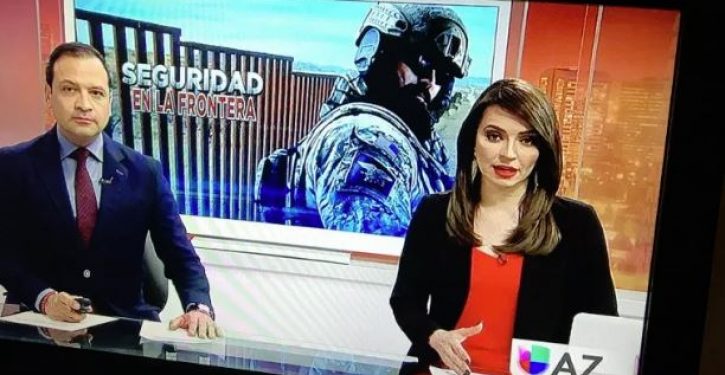 [Ed. – They evidently couldn’t find an image of a real border patrol agent that was quite as ominous-looking.]

The Arizona affiliate of Spanish-speaking network Univision featured a story about POTUS Donald Trump’s border security objectives that was pure propaganda aimed at scaring the Hispanic population the station serves.

Featured in the broadcast was a sinister-looking bearded military character recognized by millions of gamers: Blackbeard, of the Rainbow Six game series.

Yes, that’s right, Hispanic Arizonans; a fictional Navy SEAL — or operatives like him — are preparing to patrol the U.S.-Mexico border, heavily armed and under instructions from the president to shoot any illegal crosser on sight.

Or, at least, that’s certainly the image Univision Arizona is trying to portray.

While POTUS Trump has certainly made the case that the lawlessness, mostly in the form of human and drug smuggling, along the border has risen to the level of a national emergency, and the president has indeed deployed elements of the U.S. military there to assist Border Patrol agents, it isn’t as if the White House is preparing to deploy special forces troops — or any troops who look as though they’re on a mission to hunt down Osama bin Laden’s successor.

Beto O’Rourke not only opposes new border wall but wants to tear down existing one
Next Post
Ilhan Omar says she’s fully reformed: ‘I learned’ how anti-Semitism hurts, unlike Trump