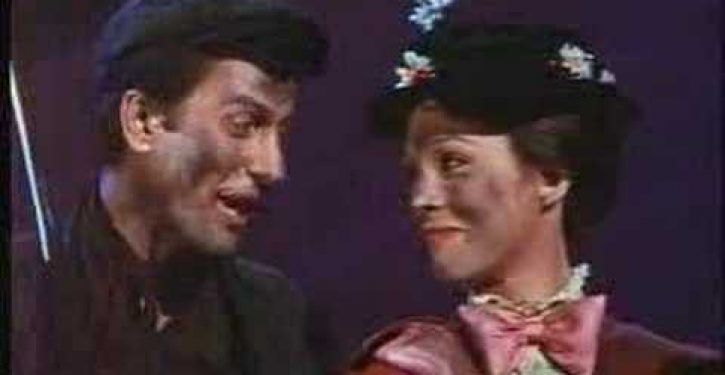 [Ed. – The whole thing is a bit of a reach, especially associating soot on characters’ faces with the ‘racist’ description of a chimney sweep as a ‘black heathen’ in the original early twentieth-century novel, but why must the Left analyze everything to death in the interests of promoting grievance?]

Daniel Pollack-Pelzner, a professor at Linfield College, pointed to a scene in the 1964 film where Mary Poppins’ face is covered in black soot from a chimney.

“When the magical nanny (played by Julie Andrews) accompanies her young charges, Michael and Jane Banks, up their chimney, her face gets covered in soot, but instead of wiping it off, she gamely powders her nose and cheeks even blacker,” Pollack-Pelzner wrote in the piece published Jan. 28.

He goes on to allege that the late P. L. Travers, who authored the series of children’s books, was a racist.

“This might seem like an innocuous comic scene if Travers’s novels didn’t associate chimney sweeps’ blackened faces with racial caricature. “Don’t touch me, you black heathen,” a housemaid screams in “Mary Poppins Opens the Door” (1943), as a sweep reaches out his darkened hand.