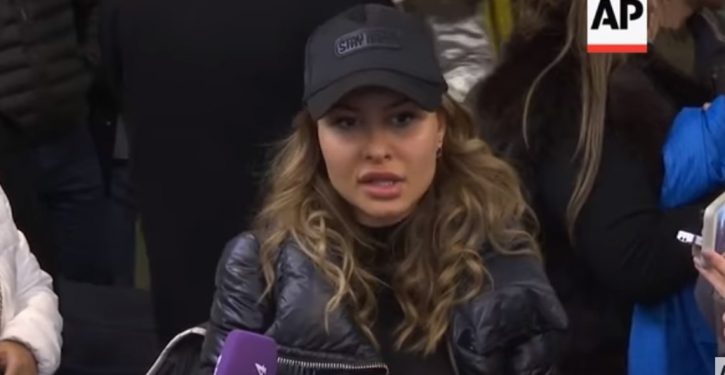 [Ed. – It defies headlining. Who can make head or tail of this melodrama of Russians slinging mud at each other, with one or two conveniently chirping out “Trump!” from time to time?  This is a total crock.  If there were anything here, it would have been identified — in a sane, intelligible manner — many months ago.  Note that the FBI has been, er, all over this woman from the beginning.  And still they have nothing — somehow Deripaska ended up with the goods, and Democratic Senator Mark Warner’s pal Adam Waldman, on Deripaska’s string, is off to the side looking creepily complicit, as usual.]

A Belarusian model who claims to have information on ties between Russia and Donald Trump’s election campaign told The Associated Press on Friday that she has turned that material over to Russian billionaire businessman Oleg Deripaska.

Anastasia Vashukevich fueled speculation around possible ties between Trump and the Kremlin last year when she posted a video from a police van, saying she had 16 hours of audio and video proving ties between Russian officials and the Trump campaign that influenced the 2016 U.S. elections. …

Vashukevich, who is also known as Nastya Rybka, returned to Russia last month almost a year after she was detained in Thailand on charges of soliciting sex, in what some believe was an attempt to silence her.

The Belarusian native who penned two books about seducing rich, powerful men … said she received multiple visits from Americans with FBI IDs who were seeking information about her claims of Russian interference in the 2016 U.S. election. She said they offered her safety in the U.S. or threatened her with a lengthy prison term if she refused to cooperate.