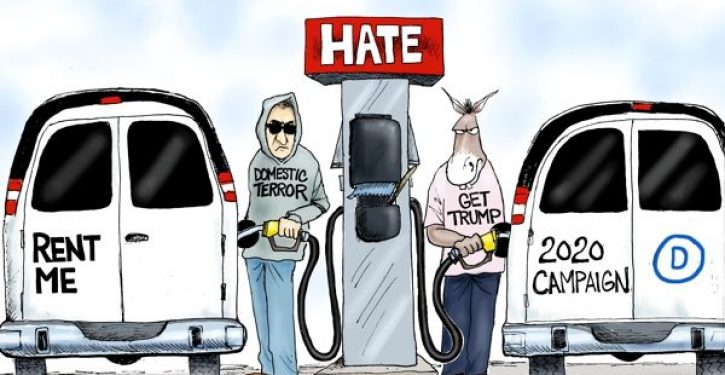 Might this story have been a tad bigger if the alleged perpetrator hadn’t been a Muslim and “person of color?” Might it have been bigger yet if the sitting president had been a Democrat?

Of course it would have. It might even have gotten a fraction of the coverage that last October’s letter bomb scare received.

The reason I pose these questions is not to point out blatant media bias, which is so glaring at this point that no one who wasn’t trying could possibly miss it, but to ask how the current “climate of hate” in this country contributed to this Taheb’s blood lust, and what we as a society are doing about it.

Because if I’ve learned anything from liberals, it’s that “climates” kill people.

Until fairly recently, I strenuously disagreed with this notion, and to some extent I still do. Climates, much like guns, do not kill people. People kill people. Blaming a climate lets the perpetrator off the hook because, when the killer’s agency is minimized, so too is his culpability. What else can a passive receptor of hate-filled messaging do except to kill the person whom he is told to despise?

The other reason I have resisted the idea of killer climates is that it seems to lead, like night into day, toward censorship. If climates kill, then our words, even our thoughts, must be policed. Preemptive measures must be taken. Children must be indoctrinated in government schools to prevent dangerous ideas from occurring in the first place. Adults must be shamed, doxxed, and fired from their jobs for fear of what other people completely unknown to the speaker might do upon hearing their words. I am on record saying that the blurring of distinctions between speech and violence is eroding our right to express ourselves, and I still believe that.

But in recent years, I have started to reevaluate my beliefs about killer climates. When a soak-the-rich socialist named James Hodgkinson attacked a group of Republican congressmen and staffers at a baseball practice in 2017, I couldn’t help but notice that he was feted by certain segments of the internet, most notably the Facebook groups we know he belonged to.

James Hodgkinson doesn’t strike me as a particularly bright individual, which tells me that he probably doesn’t do much of his own thinking. We know that he was a fan of Rachel Maddow, whose program appears on the network that pioneered the “24-hour hate” — a slightly elongated version of the “two minutes hate” that George Orwell spoke of — and it seems unlikely that his suggestible mind was not affected by it.

Which leads me to a very difficult position. Is snarky Rachel Maddow to blame for the shooting? What about Hodgkinson’s internet clique? If so, why aren’t they in jail next to him? If not, then why are we even talking about the inconsequential “climate” as a factor?

Naturally, I understand that I’m handing liberals a cudgel with which to beat me. They want to use extreme social pressure, and sometimes even the force of law, to smother voices they don’t like. They’ll applaud when I say that people who speak mere words are at least partially responsible for the violent deeds of others because it will justify their exploitation of tragedy as a silencing tactic.

This, of course, is the perpetual problem posed by dishonest brokers — and that is exactly what liberals are. We can’t have a mutual agreement that both sides will avoid rhetorical bomb-throwing because the other side will only exploit these ground rules to their benefit.

Why? Because when tragedy strikes, they see an opportunity to make policy gains. This often involves scapegoating whole classes of people and then demanding that they speak in chastened tones, if they must speak at all. It’s high-brow “shutuppery,” but shutuppery none the less.

For a good example of this, consider the JFK assassination. Though the man who struck down the president was an unequivocal communist, this fact was quickly swept aside for political reasons. Some denied that he was a communist while others denied that he was even the assassin.

But the most curious group of people are those who acknowledged Lee Harvey Oswald as both — but didn’t care. We can count the grieving widow Jackie Kennedy among this bunch. Upon learning that her husband’s assassin was a left-wing radical, she remarked: “He didn’t even have the satisfaction of being killed for civil rights. It had to be some silly little communist.”

Note the dismissive tone here: a “silly little” communist. Would she would have called her husband’s killer a “silly little” right-wing zealot if it had turned out to be a John Bircher? Doubtful. More important was Mrs. Kennedy’s apparent desire to see her late husband become a martyr for some cause other than the one he died for. It clearly bothered her that JFK was a victim of the Cold War, not the civil wrongs movement.

And she wasn’t alone. In short order, America’s elite decided how President Kennedy and his murder would be recalled in popular memory, then exploited it for political gain. Less than a week after the assassination, the new president, Lyndon Johnson, addressed Congress, saying: “No memorial oration or eulogy could more eloquently honor President Kennedy’s memory than the earliest possible passage of the civil rights bill for which he fought for so long.”

Johnson was referring to what would become the Civil Rights Act of 1964, a bill that is both oppressive to the human spirit and unconstitutional on so many counts that I sometimes lose track. The newly inaugurated president hoped to use some of his predecessor’s barely coagulated blood to grease that abomination through the legislative process — a result with which I am sure Lee Oswald would have been very pleased. He, like all communists, was a supporter of “negro rights” as they were called at the time.

To this day, people still blame Dallas’s allegedly nasty, reactionary climate for Kennedy’s murder. Authors Bill Minutaglio and Steven L. Davis even published a book for the assassination’s fiftieth anniversary called “Dallas 1963” about the “climate” in that city in the weeks and months leading up to November 22, as if it had anything to do with the actual murder.

If there was an actual patsy here, it was Dallas, not Lee Oswald. Dallas was framed. All the people of Dallas did was to exercise their constitutionally protected rights to speak their minds about Kennedy and his policies; and for that were slandered, and continue to be slandered, as accessories to murder.

Of course, there are more examples beyond the JFK assassination to illustrate the point. When a Hillary-supporting Muslim Democrat of dubious sexuality attacked a “gay” disco in Orlando, the ACLU and the media blamed Christians. When a bisexual, Bernie Sanders-supporting, alleged child molester was arrested that same day, just hours before he planned to shoot up a West Hollywood “pride” parade, ThinkProgress blamed Christians and conservatives. In 2017, the New York Times apologized for claiming as fact that Tucson shooter Jared Lee Loughner had been inspired by Sarah Palin and her notorious crosshairs map. When Robert Bowers killed eleven worshipers at a Pittsburgh synagogue, the media pinned the blame on — who else? — President Trump. Considering the fact that Bowers is a registered independent, that he specifically stated that he hadn’t voted for Trump, and that he thought Trump was controlled by Jews, this was an absurd claim.

I sometimes ask myself how any one group of people could be so utterly incompetent when it comes to assigning blame. How is it that liberals’ accusations of incitement to violence seem to contaminate the wrong people with such disturbing regularity? And then it occurs to me. They always blame the people they really want to be shamed and silenced, whether or not they are guilty of anything. Liberals don’t care how broadly blame is spread. They don’t even mind when blame is apportioned to the complete opposite target — blaming Christians for a Muslim terrorist attack, for example, or blaming John Birchers for a communist’s assassination plot.

This bad faith is why we can’t ever agree with liberals to brush up on our public civility. There can be no gentlemen’s agreement with a movement that lives and breathes on bad faith. All of this talk about watching civility in discourse is their polite way of telling us to shut up.

Don’t bet on Beto: Liberal knives come out for O’Rourke
Next Post
The false tale of the Native American drummer and the boys in MAGA hats