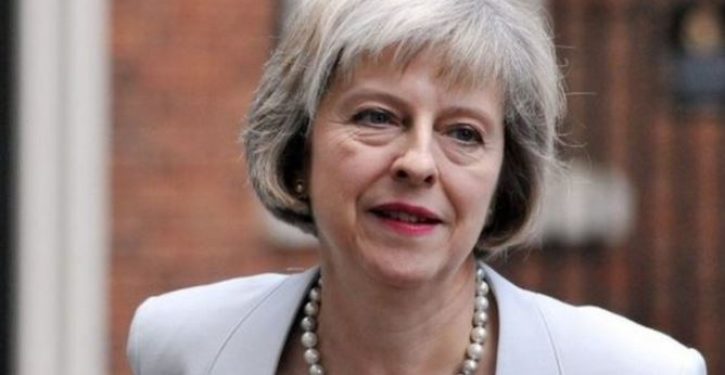 [Ed. – Have seen different takes on whether it’s actually a record; one news outlet apparently found an equally wide vote margin — 230 — back in 1918. In any case, it’s a thundering defeat, not for Brexit itself but for May’s much criticized (and indeed weak and disadvantageous) deal.  Labour leader Jeremy Corbyn has already proposed a no-confidence motion against the May government, which Parliament appears likely to take up tonight. Biggest UK government crisis I can remember since the massive labor strikes and IRA attacks of the 1970s — and maybe longer than that, depending on how this goes. Note: the MSM, including the wire services (like AP), are in the tank for the EU perspective on this. They routinely depict the consequences of a “hard” Brexit as “tumultuous” and scary.]

British lawmakers have rejected Prime Minister Theresa May’s Brexit deal by a huge margin, plunging U.K. politics into crisis 10 weeks before the country is due to leave the European Union.

The House of Commons voted 432 -202 on Tuesday against the deal struck between Britain’s government and the EU in November.

Legislators from both pro-EU and pro-Brexit sides of Britain’s political divide rejected May’s entreaties to back the deal and deliver on citizens’ the June 2016 vote to leave the 28-nation bloc. …

Unless a deal is ratified, Britain is set for a disorderly exit from the bloc on March 29, with potentially tumultuous economic and social consequences.

New migrant caravan leaves Honduras for journey to U.S. border
Next Post
Can China afford to attack a U.S. carrier? Depends on what the meaning of ‘afford’ is