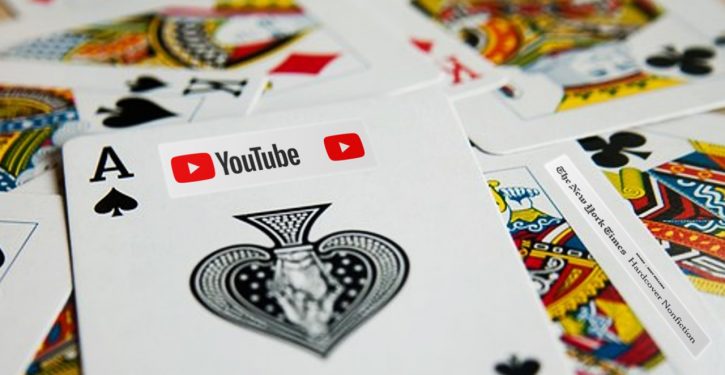 YouTube was recently embarrassed to discover that its results for the search term “abortion” were, ahem, too pro-life.

When Slate columnist April Glazer, who is staunchly pro-abortion, searched YouTube for “abortion,” she was alarmed to find that the top results included a video from pro-lifer Ben Shapiro and images of a baby’s foot in a pool of blood, or what Glazer deemed to be “gory videos rife with misinformation.” Glazer fired off an email to Youtube and the results were soon “fixed.”

“I emailed YouTube Friday afternoon asking why anti-abortion videos saturated the search results for ‘abortion,’ and if the platform thought accurate, health-focused information had a place there,” wrote Glazer. “By Monday morning, before the company got back to me, the search results had changed to include a number of news outlets among the top results, including a video from Vice about how women trying to get abortions are being stymied by anti-abortion centers that masquerade as clinics.”

The pro-abort writer said “jump” and YouTube said, “how high?”

I can attest that at the time of my writing, the video about fake abortion clinics was the first result. Naturally, the allegation that pro-life crisis centers practice false advertising remains the pro-abortion movement’s primary pretext for shutting these centers down. The actual reason, of course, is that they cut into the abortion industry’s profits.

The top ten videos included material from liberal outlets including Vice, Buzzfeed, CNN, the BBC, the CBC, and even HBO’s John Oliver, who I’m sure offered nothing but “accurate, health-focused information.” Among those videos was a BBC production called “My Abortion Story” about women agonizing over their decision to have abortions, including one woman who spoke of a “bean” inside her “belly.” Children aren’t beans and they don’t grow inside women’s bellies, but neither Glazer nor YouTube seem to have a problem with that misinformation.

Abortion is the killing of a child and any video that disputes or even skirts that fact is misinformation. What Glazer did was to ask YouTube to arrange results so that her preferred flavor of misinformation ranked at the top. YouTube, which had presumably ranked their original results according to some neutral algorithm, agreed to stack the deck to suit the tastes of a pro-abortion activist.

I’m sure they’d do the same thing for anyone, right? Not likely.

YouTube is, of course, owned by Alphabet Inc., the same parent company as Google. It’s a Left Coast tech outfit where social justice warriors call the shots. I’m sure that they were absolutely appalled to learn that their algorithms, which no rational person believes were intentionally skewed toward the pro-life side, had produced the “wrong” results. They were happy to have the problem pointed out to them and even happier to fix it.

But that’s just how social justice warriors work. Every seemingly neutral system that society has devised to produce fair and objective results is seen as a game to be scammed. They exert enormous pressure to rig the results in their favor.

Consider, for a moment, the New York Times Best Seller list. For most of my life I believed that it was simply a list of the bestselling books in America as reported by booksellers. I’m not sure if it ever was, but certainly isn’t now.

The list is rigged. The Times can’t entirely ignore conservative books on the list — that would be too conspicuous — but it can fudge the numbers. And it does.

In 2015, Ted Cruz’s book “A Time for Truth” sold enough copies to earn itself a top spot on the list. And yet it didn’t appear. The Times argued that it doesn’t include bulk sales as part of its calculation, which would exclude books bought en masse by a campaign. That’s understandable. Some authors buy their own books by the boatload just to create a buzz, then distribute them to campaign staff and other boosters. Yet Barnes and Noble countered that it saw no evidence of bulk sales for this title. Amazon said the same, as did Cruz’s publisher, HarperCollins.

A spokesman for the Cruz campaign called upon the Times to publicly release its evidence of bulk sales or to apologize for their exclusion. NYT did neither.

Meanwhile, the Wall Street Journal was listing Cruz’s book as the fourth bestselling nonfiction tract in America. A slight discrepancy between the Times and the Journal is to be expected, but for Cruz’s book to rank fourth in one newspaper and not rank at all in the other? That one stinks.

“The notion that we would manipulate the bestseller list to exclude books for political reasons is simply ludicrous,” said Eileen Murphy of NYT. And we all know the New York Times is agnostic to political considerations.

The politicization of the Best Seller list was again an issue in 2017 when Dinesh D’Souza’s book “The Big Lie: Exposing the Nazi Roots of the American Left” was ranked at number seven on the Times’s list. D’Souza’s publisher cited BookScan, a nonpartisan metric that tracks book sales, to show that the Times’s list was bunk. BookScan is owned by Nielsen, the same company that produces radio and television ratings. Nielsen is considered nonpartisan and nearly everyone in the “biz” considers its ratings authoritative.

BookScan listed “The Big Lie” as number two; the Times as number seven. BookScan listed “Option B” by Sheryl Sandberg — COO of Facebook and a staunch liberal — as number nine. NYT listed her as number six. Nearly every book written by a conservative ranked lower on NYT’s Best Seller list than on BookScan’s ranking.

The NYT bestseller list is, like the rest of that newspaper, Fake News. It’s #Pizzagate. It’s the pope endorsing Donald Trump. It’s garbage.

The process of peer review is another that leftists have tried to hijack. For the uninitiated, peer review is the process that credentialed experts must submit their academic papers to before they can be taken seriously. The experts’ work can only be refereed by other experts because the rest of us aren’t qualified.

Naturally, liberals like to to brag about getting their science from peer-reviewed journals. This particularly annoying habit is on display whenever global warming is the topic of debate. In theory, peer review should be a meaningful safeguard against junk science, but in practice it’s just another system to be gamed by agenda-driven orthodoxy. It doesn’t detect bad science and often validates it.

Peer review is supposed to be double-blind—that is, neither the author nor the reviewer should know the identity of the other. The reviewer should have no connection to the project. But that’s not always how it works. Sometimes, colleagues review each other’s work and give each other stellar marks.

We learned from the Climategate emails, for example, that Andrew Weaver, who was once the editor of the peer-reviewed Journal of Climate, asked climatologist Keith Briffa to peer-review a paper by the disgraced scientist Michael Mann, et al. This was highly unethical since Weaver had previously been the editor of another paper by Mann, and Briffa had been co-author of that same earlier paper. It was one, big, incestuous circle. Briffa declined to peer-review the paper but only because he was too busy.

Other members of this tightly-disciplined hivemind were also working to ensure that papers they didn’t like were excluded from peer review. They went after a co-editor of one peer reviewed journal, Geophysical Research Letters, and got him fired. The editor, James Saiers, made the mistake of publishing two papers that were skeptical of anthropogenic global warming.

Wrote Tom Wigley: “If you think that Saiers is in the greenhouse skeptics camp, then, if we can find documentary evidence of this, we could go through official AGU channels to get him ousted.” Wigley, by the way, is the same guy who peer-reviewed the aforementioned paper by Michael Mann after Keith Briffa declined. Following Saiers’s termination, a triumphant Michael Mann wrote: “The GRL leak may have been plugged up now w/new editorial leadership there.”

The circularity of the logic is obvious here. Skeptical papers have no credibility because peer-reviewed journals won’t publish them. But then again, any journal that publishes such a paper has no credibility. Editors must be intimidated not to publish such papers lest anyone think that there’s a real debate. This is how liberals create “consensus”–not by persuasion but through fear.

Another email summed up the attitude of this clique pretty well. Wrote Phil Jones: “I can’t see either of these papers being in the next IPCC report. K[eith Briffa] and I will keep them out somehow-even if we have to redefine what the peer-review literature is!”

Which is par for the course. It doesn’t matter whether the system at hand is peer-review, the NYT Best Seller list, social media, or any other seemingly objective system, liberals always seem to find a way to rig it. And they don’t lose a wink of sleep over it.