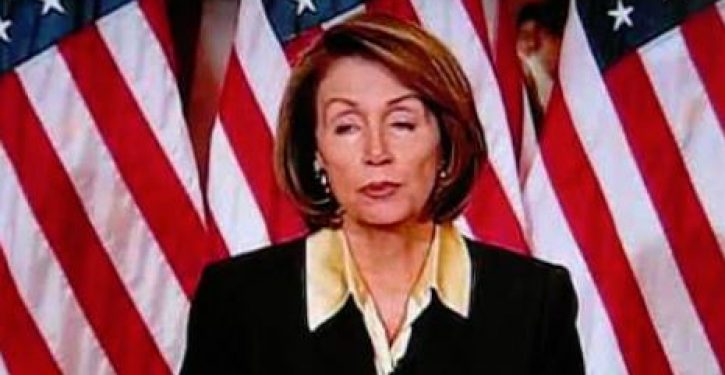 [Ed. – No one considers Pelosi Trump’s equal — and certainly not the Constitution.]

Incoming House Speaker Nancy Pelosi (D., Calif.) said in an interview with the New York Timesthat the Constitution considers her to be President Donald Trump’s equal.

Pelosi is set to regain the speaker’s gavel after spending eight years as House minority leader. Pelosi was the first female speaker of the House from 2007 to 2011, and she maneuvered to get the party’s votes necessary to secure the speakership again after Democrats won back the chamber in the November midterms.

In a piece with a headline declaring her an “icon of female power,” Pelosi was asked by the reporter “if she considers herself Mr. Trump’s equal.”

“The Constitution does,” she replied.

While the Presidential Succession Act names the speaker of the House second in line for the presidency after the vice president, the two positions are not equal. Pelosi may have been referring to her stature as a leader of one of the co-equal branches of government.

Pelosi won liberal accolades last month for her Oval Office interaction with Trump where they argued over funding for the White House’s desired southern border wall. The impasse over the border has forced a partial government shutdown that’s lasted nearly two weeks.