President Trump is in deeper political trouble than he thinks. And I’m not talking about whatever special counsel Robert Mueller has up his sleeve. Trump has real-life re-election trouble.

The midterm results were clear about this. Millions of voters whom Trump needs to win a second term in 2020 expressed their disdain for him in the only way they could—by voting against Republicans. …

As luck would have it, a political recovery by Trump is not only possible, it would be easy. It takes three things. …

First, he needs to recognize he’s headed for defeat. He didn’t get to this point in 2016 until the Access Hollywood tape leaked a month before the election and his campaign almost collapsed. He saw doom ahead, had to clean things up quickly—with teleprompters and nicer talk—and did.

Second, he’s got to jettison the most unhelpful of his rules of political combat—that is, never apologize. Trump’s fear is that apologizing shows weakness. For most politicians, including a few presidents, it might. But not this one. Trump has persuaded the entire world he’s not a wimp. 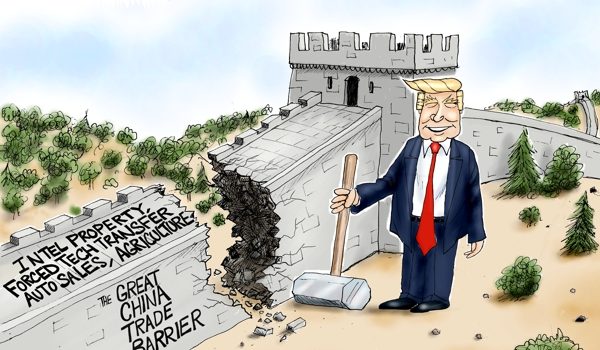 Cartoon of the Day: The Great Trade Barrier
Next Post
Your daily dose of Ocasio-Cortez: 100% renewable energy will lead to racial justice