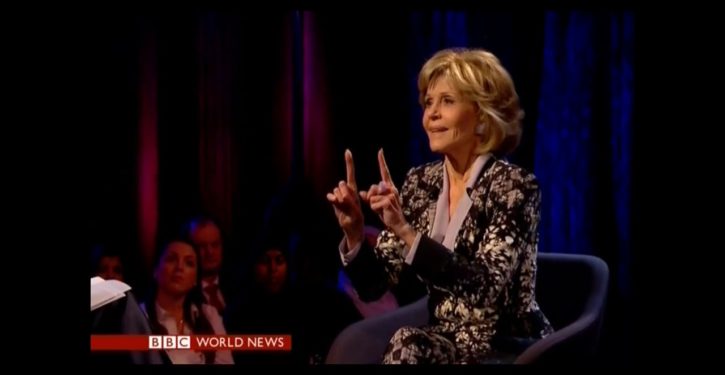 [Ed. – One could make a crude suggestion, but suffice it to say she hasn’t learned much since the days of Hanoi Jane.]

Actress Jane Fonda believes the upcoming midterms are the “most important elections” of her lifetime.

“So much depends on what happens,” the actress recently said at a film festival in France, according to The Hollywood Reporter.

The 80-year-old actress — who currently stars in the Netflix series “Grace and Frankie” — said she is struggling personally in dealing with Donald Trump’s presidency.

“It’s hard for me to breathe right now,” she said.

The “Barbarella” star added that she has actually cut some people out of her life because of their pro-Trump views, specifically some friends who live in Georgia.

“I love them, but I can’t talk to them anymore. And I will fight to my last breath to stop what they are trying to do,” she said.

Fonda previously said America is in an existential crisis thanks to President Donald Trump.

“People always say, ‘Was it worse in the ’60s and ’70s?’ It was not! This is the worst! This is an existential crisis. And if we don’t do what needs to be done — in terms of making our voices heard, and our votes heard — that’s it! We don’t have time,” she said.

‘We simply cannot allow people to pour into the U.S. undetected’: Which pol said it?
Next Post
100 ISIS terrorists caught in Guatemala as Central American caravan heads to U.S.