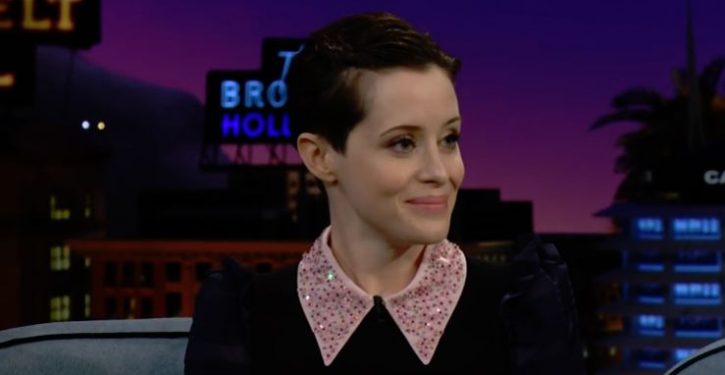 [Ed. – Does she mean that as a criticism or a compliment? Meantime, she say she wants to ‘violently hurt’ a #MeToo protester. Sound like her indoctrination was complete.]

British actress Claire Foy shared her views about President Trump, calling him “the giant penis of America” in a new interview.

“The Crown” actress opened up about politics in a profile with The Hollywood Reporter released Wednesday.

“All powerful! D.C. is where the giant penis of America lives … in more ways than one,” Foy told the outlet referring to Trump.

The singer also revealed that she wanted to “violently hurt” an anti-#MeToo movement protester she encountered at an anti-Brett Kavanagh protest the weekend the judge was confirmed to the Supreme Court. The actress explained that the protester carried a sign which read “#MeTooFraud” and that she did not agree with his display of action.

“How dare you write #MeTooFraud on a placard?” Foy said of the protester. “It just breaks my heart, how other human beings just care so little about people. That person must not have any idea of what those women have been through. I have a real problem with people not understanding the effect that they have on other people.”