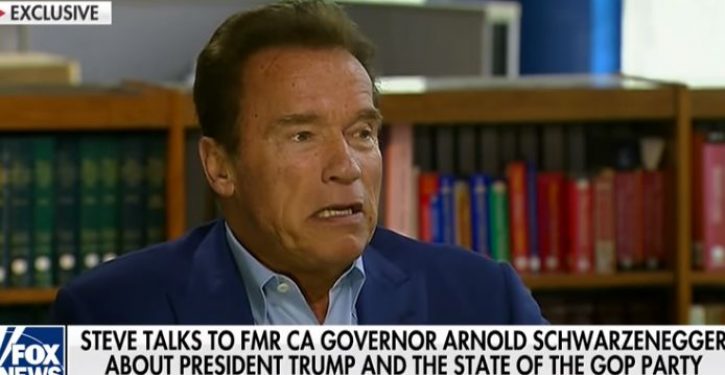 [Ed. – This is quite a reckoning we’re having.]

At least as early as 2004 Schwarzenegger called California Democrats “girlie men” and noted that in the next election the GOP would “terminate” them. His phrase even became the stuff of Saturday Night Live parody in the characters of faux bodybuilders Hans and Franz. …

In a new interview with Men’s Health magazine, Schwarzenegger is abjectly apologetic over his “girlie men” taunt.

“At the time it felt like the right thing to do. It was in my gut. I improvised it. I called them girlie men because they weren’t willing to take risks,” the actor told the magazine.

“They were afraid of everything,” he explained. “Politicians, in general, want to do little things, so there’s no risk involved.”

But, today there are regrets. Schwarzenegger now says his rhetoric was counterproductive. “It was shortsighted. In the long term, it’s better to not say that, because you want to work with them.”

Schumer’s weird science: ‘If we did more on climate change, we’d have fewer of these hurricanes’
Next Post
Pence to Central America: ‘Tell your people if they can’t come legally, don’t come at all’