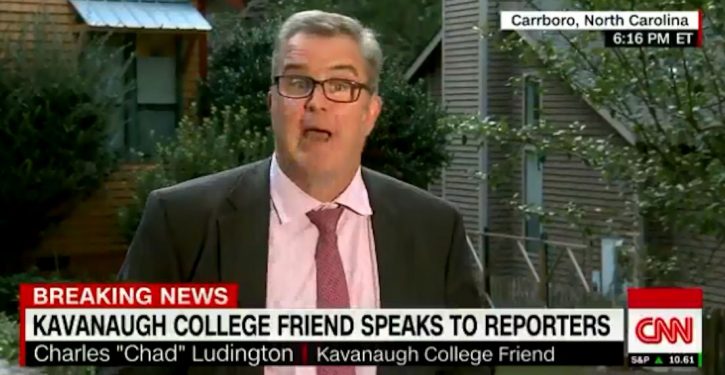 [Ed. – Saw this guy speaking to the media in video clips circulating Monday evening. Appears to be getting his 15 minutes of fame.  Gee, maybe a registered Democrat with a history of small donations to Democratic candidates?  The Washington Examiner story also refers to a report from NYT about a bar fight — seemingly the same incident — in which Kavanaugh was questioned about possibly throwing ice on a guy, although it’s not clear he was part of the bar fight.  No arrests are mentioned.  Kavanaugh was 20 in 1985.]

The incident was first mentioned in a statement from Charles “Chad” Ludington, a classmate of Kavanaugh’s at Yale who drank with him regularly. “On one of the last occasions I purposely socialized with Brett, I witnessed him respond to a semi-hostile remark, not by defusing the situation, but by throwing his beer in the man’s face and starting a fight that ended with one of our mutual friends in jail,” Ludington said in a statement Sunday.

The report does not list any arrests, and it appears that no charges were filed.

Keith Ellison’s lawyer says abuse claim against him is ‘unsubstantiated’
Next Post
Ford/Kavanaugh questioner: ‘I do not think a reasonable prosecutor would bring this case’