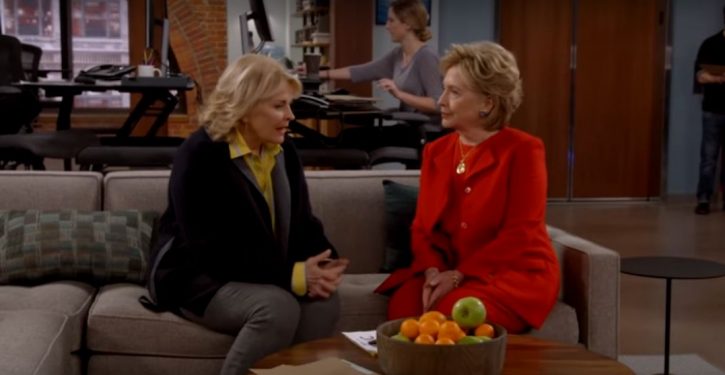 [Ed. – You can watch it at the link.  Quicklook review: actually not bad, as amateur acting goes. She didn’t look as awkward and silly as high-profile amateurs often look.  Make of that what you will.]

After 20 years off air, the Murphy Brown revival premiered last night with an unexpected guest star: Hillary Clinton. Her appearance had been kept a secret, and the scenes in which she appeared had been excluded from advance screeners given to critics, with a note indicating a “special guest star scene” would be part of the first episode. …

At the end, Brown sends her off because she thinks Hilary is “over-qualified,” but keeps her business card that lists her email address as: [email protected].

Trump: 7th FBI investigation of Kavanaugh may be a ‘blessing in disguise’
Next Post
Communists planning armed insurrection on Twitter