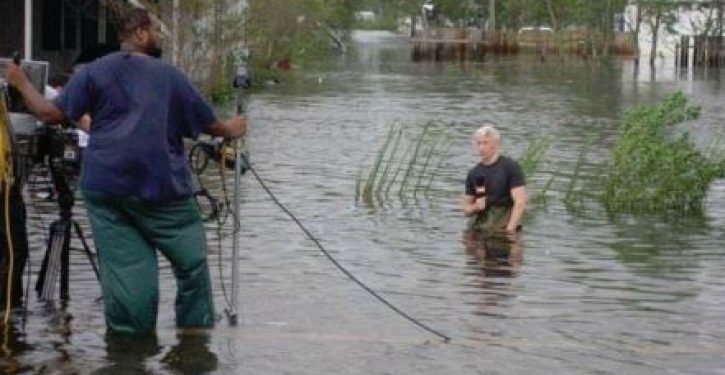 [Ed. – A CNN anchor denies lying. Where have we heard that before?]

CNN’s Anderson Cooper became enraged on Monday over pictures and memes of him that had been spread over the weekend on social media that showed him in flood waters, which many falsely assumed was from Hurricane Florence.

The images were from ten years ago when Hurricane Ike hit the Southern United States and Cooper was reporting from Texas.

Cooper used the fact-check segment to lie about Donald Trump Jr. after the president’s son had tweeted out a picture from the 2008 broadcast.

“Donny Jr. was claiming it showed me in Florence faking the depths of flood waters in order to somehow harm his father,” Cooper said. “And I quote from his tweet ‘stop lying to try to make @realDonaldTrump look bad.'”

Trump Jr. never said the photo was from Hurricane Florence and he was clearly not insinuating that Cooper was “faking the depths of flood waters in order to somehow harm his father.”