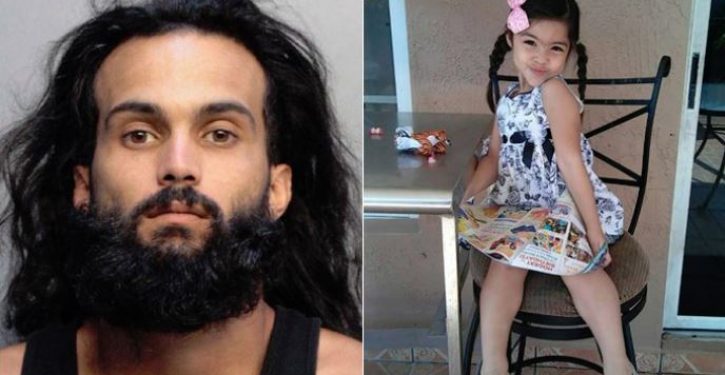 [Ed. – The apparent motive: The child soiled herself.]

A Florida man who initially told investigators that his girlfriend’s 3-year-old daughter died after slipping on rocks during a fishing trip has now been charged in her death.

On Monday, police arrested 27-year-old Dennys Llopiz, who is being held without bail in a Miami-Dade jail on a charge of first-degree murder.

Three days earlier, Llopiz called police saying he had found his girlfriend’s little girl, Skyler Hartley, unresponsive in the shower, according to the Miami Herald. Llopiz told officers he put Skylar in the shower after she soiled herself while her mother was at work.

An autopsy conducted over the weekend found deep tissue injuries on much of her body, along with a ruptured liver and lungs and three broken ribs, according to the Sun Sentinel. The 3-year-old’s cause of death was found to be blunt force trauma.

Llopiz reportedly told police that the girl had fallen while they were fishing the night before, but Skylar’s mother said the two had never gone on a fishing trip.

After examining Llopiz’s cellphone, detectives found text messages that may have signaled a motive for the vicious, fatal beating.