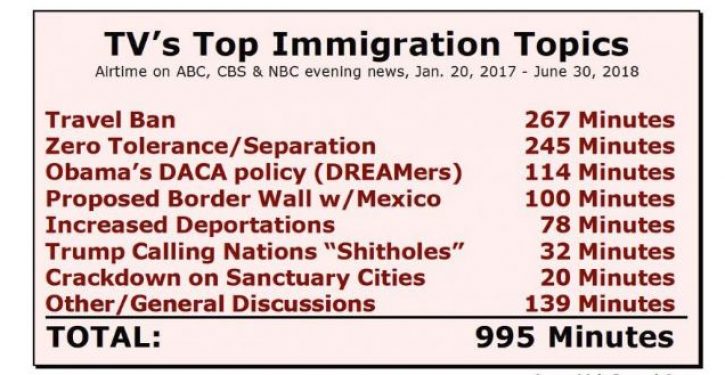 [Ed. – Quite the opposite of their coverage of Obama scandals and controversies.]

During the 18 months of the Trump presidency, immigration has received more airtime on the three broadcast evening news shows than any other policy topic. The networks’ coverage has been relentlessly hostile to the administration (92% negative, just 8% positive), largely because these newscasts have framed nearly all of their coverage around the plight of those adversely affected by the administration’s enforcement agenda, and have virtually ignored law enforcement or anyone harmed by illegal immigration.

From January 20, 2017 through June 30, 2018, the ABC, CBS and NBC evening news programs spent a combined 995 minutes discussing various immigration topics, or roughly one-sixth of all coverage of the administration. Since Inauguration Day, only the Russia investigation has received more airtime (1,680 minutes).

… Even in June, when the evening newscasts devoted very heavy coverage (132 minutes) to North Korea and the historic June 12 summit between President Trump and dictator Kim Jong-un, these broadcasts spent nearly twice the airtime on the administration’s zero tolerance policy and the resulting separations of illegal immigrant parents and their children.