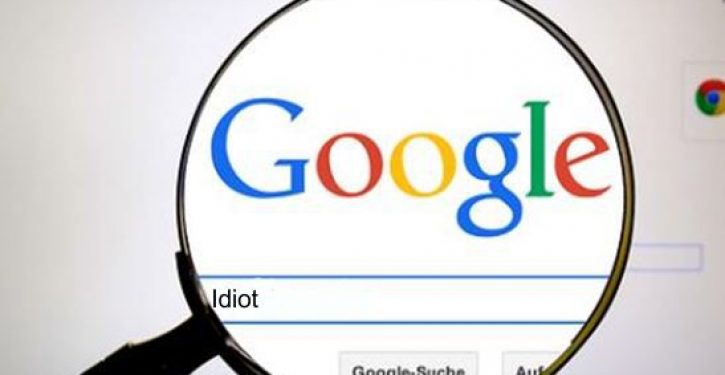 [Ed. – According to The Hill, angry activists are behind the stunt, as though Google is not above such a disrespectful act.]

The Guardian first reported the trend on Thursday, which appeared to begin with reddit users, as well as a initial campaign aimed at getting the 2004 Green Day song “American Idiot” to the top of the British music charts during Trump’s visit to the United Kingdom last week.

Fortune noted that media coverage of the campaigns also re-enforces the search results by associating the terms Trump and “idiot.”

Several posts on Reddit with tens of thousands of upvotes promoted the stories associating Trump and “idiot” on Thursday as well as the effort to manipulate the search results.

Google Images search results are gathered and presented in order of relevance, so high-popularity posts on Reddit, one of the internet’s most popular sites, often appear at the top of Google searches.

Google does not interfere in offensive or controversial search results. The company has instead opted to explain some questionable search results through advertisements that appear to users of relevant search terms.

Report: Mueller offers immunity to Tony Podesta in exchange for testimony against Manafort
Next Post
Hillary can’t remember a time when the White House failed to defend a diplomat