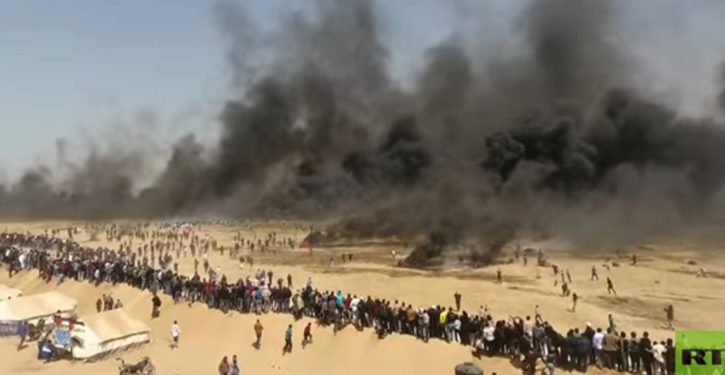 Gazans gather behind a bank of burning tires at the border fence with Israel on 6 April 2018. (Image: Screen grab of RT video, YouTube)

[Ed. – This pot has been simmering for months now, with hundreds of rocket attacks from Gaza and day after day of destruction in Israel from Hamas “fire kites” and rigged balloons.]

The Israel Air Force launched a major wave of strikes at Hamas targets across the Gaza Strip on Friday evening as a cabinet minister said Israel was preparing a massive response to Hamas’s failure to heed repeated Israeli warnings to end the violence along the Gaza border.

“At this time our aircraft are carrying out widespread attacks against terror targets belonging to Hamas in the Gaza Strip,” the IDF said, adding that this came after the “serious shooting incident against our forces,” referring to sniper fire at IDF troops during a riot on the border earlier in the day. The IDF later revealed that a soldier had been killed in the incident.

The army said 15 targets were hit, including the “Hamas brigade headquarters in Zeitoun.” The army said the headquarters were completely destroyed along with “weapons and ammunition stores, training grounds, observation posts, control centers and the offices of the brigade commander.”