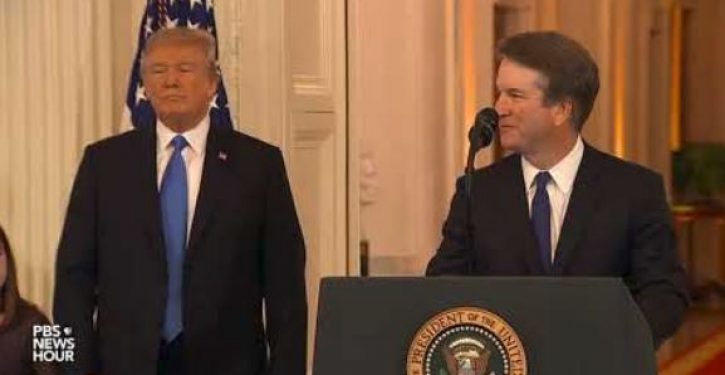 [Ed. – The Left explains the world to the rest of us mere mortals.]

Here are six of the craziest theories and dumbest hot takes about Justice Kavanaugh:

In a piece titled “Trump Trolls His Based With Kavanaugh Pick for Supreme Court,” The Daily Beast’s Matt Lewis describes Trump’s selection of Kavanaugh as a “letdown” not just for conservatives, but also for Kavanaugh.

Kavanaugh, asserts Lewis, is perceived by conservatives as a “boring establishment moderate.” CNN’s Jake Tapper and Chris Cuomo expressed the same sentiment on Monday night. Partial transcript below of Cuomo’s and Tapper’s exchange:

Despite predicting Kavanaugh’s development into an “excellent” judge, National Review‘s David French — once Bill Kristol’s presumptive spoiler candidate to take down Trump in the 2016 presidential race — describes Trump’s selection as an “opportunity lost.” He argues Judge Amy Coney Barrett to be a preferable nominee, in that Barrett would better “inflame the culture wars” and help “blunt the force of secular bigotry” directed from the left against conservative and orthodox Christians.

Forget global warming: Winter is coming — and it will be a doozy
Next Post
House committee subpoenas FBI lawyer Lisa Page for private interview