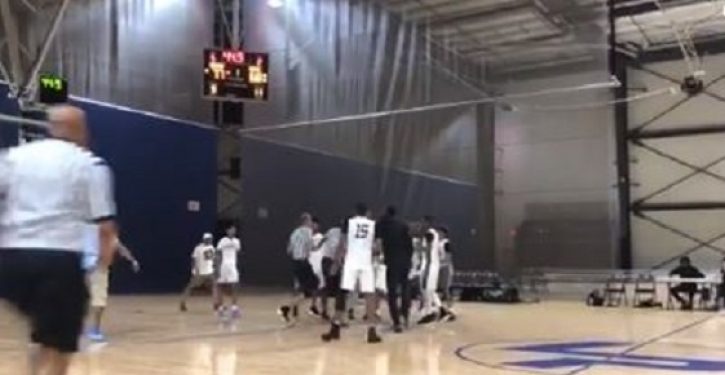 [Ed. – Who’s supposed to settle fights between referees and players?]

A massive brawl erupted at a youth basketball game between R.A.W. Athletics from Chicago and the Houston Raptors in the Atlanta area on Sunday morning between both teams and the officials running the game.

In a pair of videos, first posted by Doug Jones on Twitter, one can see a trio of players attacking an official lying on the ground near the 3-point line on the court.

The fight, which occurred late in the fourth quarter with R.A.W. trailing, quickly escalated as more officials and adults run in and try to break up the fight. Soon enough, it was an all out brawl.

Upon first look, it seems that players attacked one official, which sparked the fight.

However, head coach Howard Martin — who runs R.A.W., the team in white playing in the basketball game — tweeted out his side of the story shortly after videos of the fight surfaced on Twitter on Sunday morning.