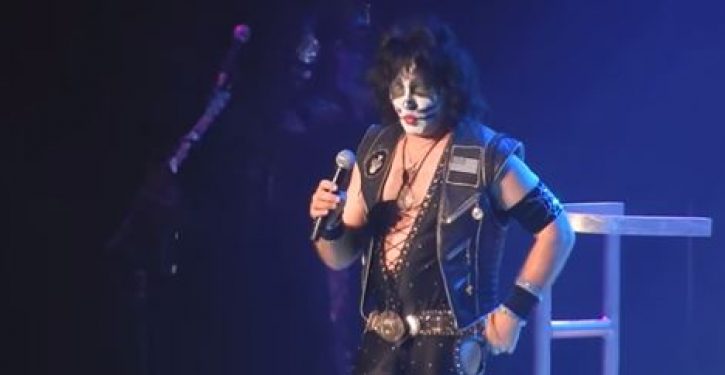 Legendary rock band Kiss gave a big ol’ middle finger to anti-American clowns like Colin Kaepernick, Brandon Marshall, or any other athletes that have been disrespectful during the national anthem.

The Hall of Fame rockers stopped one of their shows to honor military members, recite the Pledge of Allegiance, and then performed a rockin’ version of the national anthem.

Being a multi-millionaire for playing the game of football and whining about “oppression,” not so cool.

At a stop in Worcester, Massachusetts, Kiss brought its roadie for the day onstage, along with other members of the military past and present, and led the entire arena in the Pledge of Allegiance, something the band has done before. However, this one had a bit of a special message to a particular NFL player — a not-so-subtle knock to the shenanigans by San Francisco 49ers quarterback Colin Kaepernick, lead singer Paul Stanley said. …

‘We don’t want him to have the self-satisfaction’: Why Wall Street hates the Trump economy
Next Post
U.S. Citizenship and Immigration Services is starting a denaturalization task force