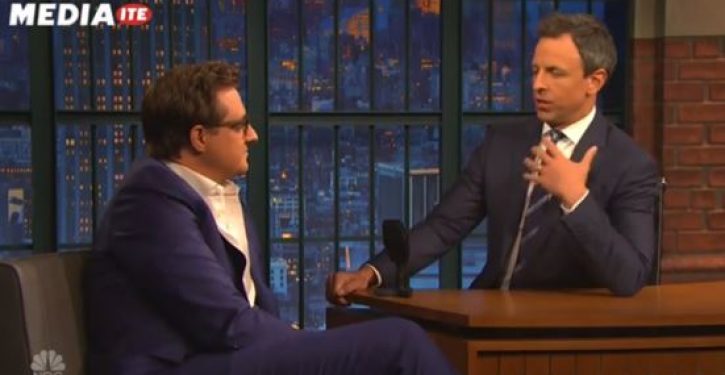 [Ed. – And he would doubtless say the same thing if the person ejected from a restaurant were a powerful black Democrat.]

MSNBC host Chris Hayes weighed in on the Red Hen showdown that took place over the weekend.

Press Secretary Sarah Huckabee Sanders was told to leave by the Lexington restaurant owner, which has since sparked a national conversation about a lack of civility. And when asked about what he thought, Hayes gave it a rather positive spin.

And I don’t think it’s a bad impulse to have of, like, yeah, don’t yell at people. Or, be, you know- I get that. That’s a human and understandable part of people’s impulses around this stuff. And, generally, I think that’s a good guiding post for people,” Hayes told Seth Meyers. “I will say this that, look, Sarah Huckabee Sanders, for example, is one of the most powerful people in the world. And in a very real and tangible sense the defining feature of a free society is that you can tell one of the most powerful people in the world in your government, ‘Get out of my restaurant.’ Like that’s genuinely like, a thing that makes a free society.”

A key in an unexpected place: Comey spiked 2017 immunity deal for Assange
Next Post
Maxine Waters stands by her call to ‘push back’ against Trump officials, claiming it was ‘peaceful’