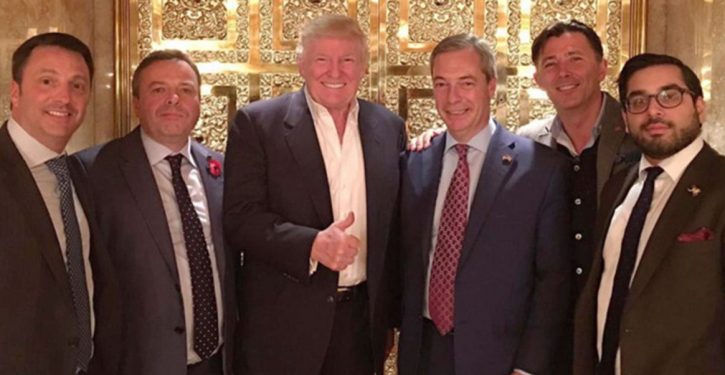 [Ed. – The spin machine has been laying the groundwork for this for a while.  We’ll see if it goes into high gear.  Sudden Theme Eruption has been a frequent feature of the narrative campaign.]

What Vladimir Putin is accused of doing to help Donald Trump win the presidency is essentially identical to what he is either accused of or proven to have done to help many other right-wing candidates in many other countries. As the plot in the United States is slowly exposed, a remarkably similar one in the United Kingdom is quickly surfacing.

Months before the United States narrowly elected Trump, the United Kingdom narrowly elected to withdraw from the European Union. Both votes advanced Russian foreign policy goals — in the latter case, by splitting up the Western alliance. (Trump has energetically pursued this strategy, too.) Russia employed many of the same tools to influence both elections. It deployed social-media bots and trolls to spread its message. It recruited friendly candidates who gave voice to previously marginal Russophile positions. And, as the newly surfaced evidence suggests, it indirectly financed the campaign.