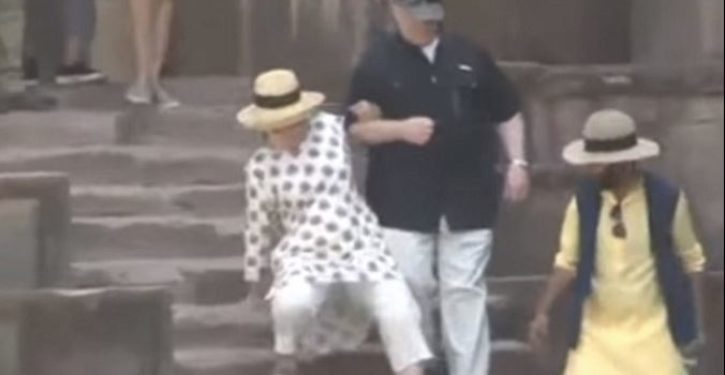 [Ed. – She sure is good at hiding her maladies.]

Hillary Clinton has donned yet another massive scarf during an appearance in Australia after earlier photos indicated she might be trying to hide a back brace.

The 70-year-old draped the $1,100 patterned Hermes cashmere blend shawl around her shoulders when she met with Australian former Prime Minister Julia Gillard in Melbourne on Thursday.

Her scarf was tied high around her neck and covered the top of her navy blue jacket.

It comes after social media users pointed out earlier in the week that Clinton was mostly likely opting for the style choice to hide a possible back brace.

She was photographed coming out of her daughter Chelsea’s apartment in New York last week with a strange protrusion coming from underneath her jacket.

Some on social media were also quick to point out her upright posture and bundled up clothing despite the warmer temperatures in New York.

‘(Hillary) looks to be wearing some sort of back brace – weird protrusion and scarf (80 degrees in NYC) up to her chin,’ one Twitter user wrote.