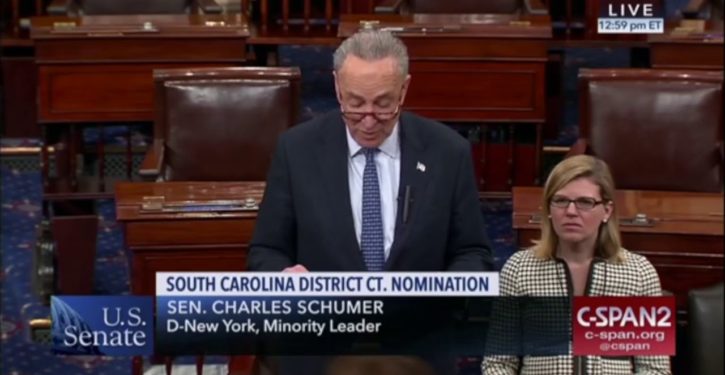 [Ed. – Prediction here notwithstanding, Dems don’t have a lock on the House, either.]

For Democrats, the Don Blankenship dream is over. The coal-mining baron and ex-con was a pleasant diversion — the prospect of yet another train-wreck Republican candidate was exactly the kind of opponent that Sen. Joe Manchin needed in his dicey reelection campaign in West Virginia — but now it’s back to the reality of a merciless map that offers little hope for Chuck Schumer’s dream of becoming majority leader.

It may be the cruelest irony of the Trump era. During an election season when the House seems to be a lost cause for Republicans and nearly every indicator suggests massive Democratic gains in November, the outlook for wresting the Senate away from the GOP remains grim.

The long list of flipped state legislative seats since Donald Trump’s election (40 at last count), the supercharged Democratic turnout in recent special congressional elections, the avalanche of small-donor cash, the geyser of grass-roots energy — none of it changes a Senate landscape where Democrats are defending more seats, in more hostile places, than at any other time in memory.