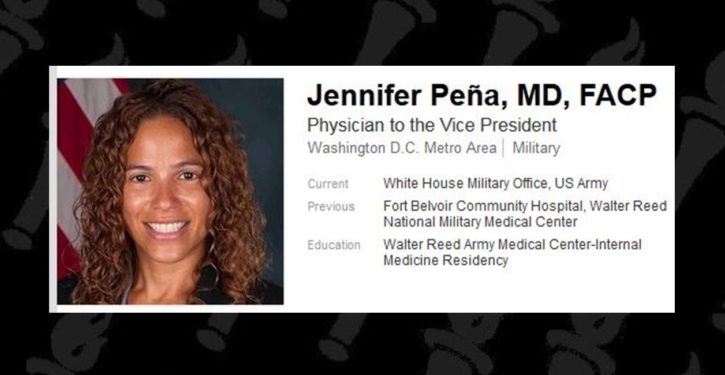 [Ed. – As we noted on Tuesday, it appears this Dr. Pena may have been an instigator behind the smear attack on Jackson.  As we would expect, the situation seems to have been dealt with quietly.  I wouldn’t foresee a lot of leaks from the VP staff.]

Vice President Mike Pence’s physician has resigned, the latest fallout from the collapse of Ronny Jackson’s nomination for secretary of Veterans Affairs.

Dr. Jennifer Peña, who like Jackson is a military physician detailed to the White House, was among those who made claims of professional misconduct against Jackson to senators considering his nomination, according to a person familiar with the events. …

Peña claimed in memos that Jackson might have violated Karen Pence’s patient privacy rights by sharing details of a medical incident involving the second lady with chief of staff John Kelly. The memos were first reported by CNN.

The allegations were troubling to many in Pence’s office and the White House, who felt that Peña misrepresented the severity of the situation in an effort to harm Jackson, according to the person familiar with the situation.