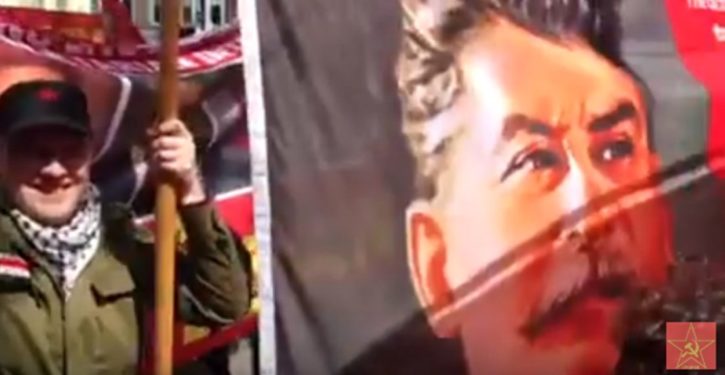 Marchers line up with their Stalin banner in London on 1 May 2018. (Image: Screen grab of Proletarian TV video, YouTube)

[Ed. – They roll the Stalin banner out every year, along with banners commemorating other mass murderers from the Communist pantheon.  But it never hurts to have a reminder. Collectivists have no problem with mass murder.]

The demonstration was organised by United Voices of the World and the Independent Workers Union of Great Britain, and included industrial disputes over pay, hours, union recognition and outsourcing. …

The action, marking International Workers’ Day, which dates back to the early days of the trade union movement, coincided with a strike by some staff at McDonald’s over pay and union recognition.

One banner, pictured by Twitter users, featured a large portrait of Stalin, along with a quote from his work speaking of the ‘dictatorship of the proletariat’ and the transition from capitalism to communism.