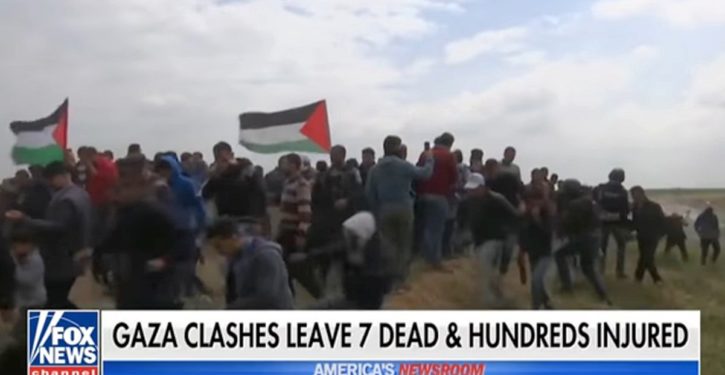 [Ed. – As reported earlier, Hamas has been preparing for this for some time.  It’s no spontaneous demonstration.  Hamas was conducting a military “exercise” to prepare for it last weekend.  Unlike the last several major confrontations between Gaza and Israel, this one hasn’t been preceded by weeks of rocket attacks from Gaza, or warnings from Israel.  It looks like a new set of tactics.]

Friday’s demonstrations mark the beginning of the Palestinians’ return to all “Palestine,” Hamas leader Ismail Haniyeh said in a speech at the scene of the mass protests in the Gaza Strip.

“We are here to declare today that our people will not agree to keep the right of return only as a slogan,” he said. Haniyeh said that the March of Return was also aimed at sending a message to US President Donald Trump that the Palestinians will not give up their right to Jerusalem and “Palestine.” There is no solution without the right of return, he added.

The Palestinians “will never recognize the Zionist entity and will never give up on Palestinian land, and on Jerusalem; [the city] is ours and there is no solution [to the Israeli-Palestinian conflict] without the ‘right of return,’” Haniyeh said, according to a Hebrew translation by the Walla news site.