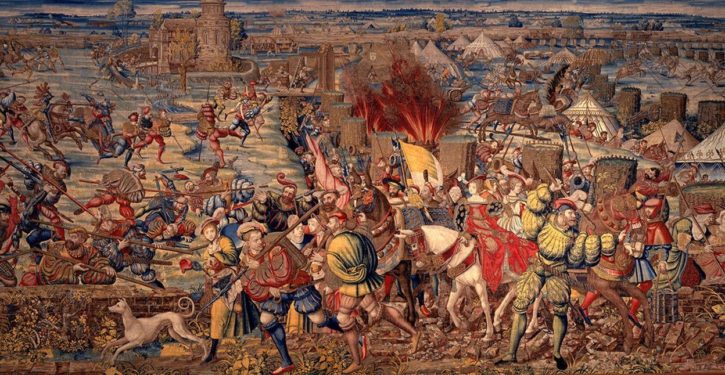 [Ed. – This is seriously ridiculous. 1848; and the Battle of Pavia (with France) in 1525.  The excuse is that “identitarians” (gasp) are apparently “identifying with” Austrian history. As opposed to what? Repudiating it? Don’t bother “explaining” it. Prejudicial interpretations of these things — e.g., of embracing history and cultural identities rather than eschewing or rejecting them (but applying that prejudice only to some people) — has to be maintained by force and intellectual coercion.  It’s not virtuous to accept one-sided, prejudicial approaches in these matters.  It’s fatal to the future, and the quality of human life.]

Kleppich posed in photographs posted to his Facebook account that showed him wearing two t-shirts including once which bore the caption, “Honour, Freedom, Fatherland”, Kronen Zeitung reports

The phrase was the rallying call for student fraternities during the 1848 liberal revolutions that shook the German-speaking world at the time. The current German flag also has a connection to the 1848 revolutions, with the black, red, and gold colours being adopted by the short-lived Frankfurt parliament, the first freely elected German parliament, from 1848 to 1850.

The other shirt, which appears to show a group of Landsknecht, medieval German mercenaries, contains the words “Stand Your Ground” and “Frundsburg 1525”, a reference to Austrian military commander Georg von Frundsburg and his famous battle at Pavia, Italy, in 1525 in which he and others captured the king of France, Francis I.