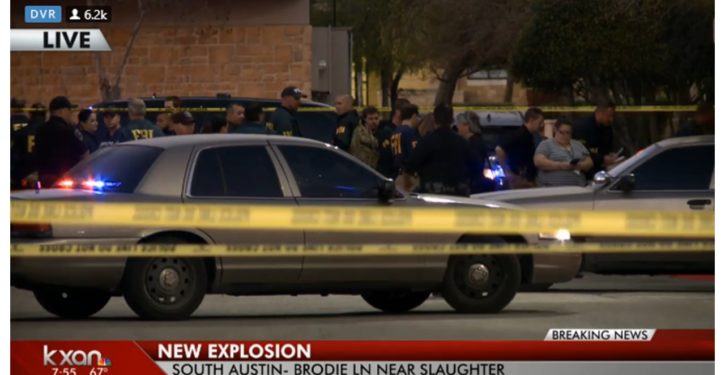 Scene of the 6th in the series of explosions in Austin, TX in March 2018. (Image: Screen grab of NBC Austin video)

[Ed. – Can this really be just one person? *UPDATE*: I’m watching Fox News right now, and the update from the Austin police as of 2 minutes ago (8:10 PM Central Time) is that there was no “explosion” at the Goodwill; rather, the item handled by the injured man was an “incendiary device.” Police are unable to say with certainty that this is connected to the series of bombings.  My take (J.E.): it’s unlikely that this is unrelated.  That’s especially the case given that a second suspicious item, possibly a package bomb, was also said to have been found in the same area.  Dan Bongino just said on Fox that he really suspects this is more than one person.  I agree.]

The Austin Fire Department says the call came in at 7 p.m. The agency says the package exploded at a Goodwill located at 9801 Brodie Ln.

Austin-Travis County EMS says a man in his 30s was taken to the hospital with serious but non life-threatening injuries. …

A spokesperson for Goodwill of Central Texas says they can’t say right now if the injured person was an employee or not. The store is regularly open until 9 p.m.

The location of the possible explosion is approximately 3.5 miles due south on Brodie Lane from the FedEx shipping store that authorities say the serial bomber used to ship two recent packages from. If this is connected to the serial bomber, this will be the sixth bombing since March 2. Early Tuesday morning, a package moving through the FedEx ground sorting center in Schertz exploded.

ICE official: Three of the illegals warned by Oakland’s Mayor Schaaf have reoffended since sweep
Next Post
Dog-paddling behind a bomber in Austin 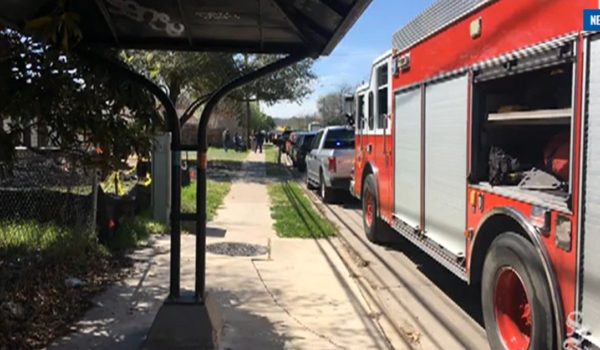