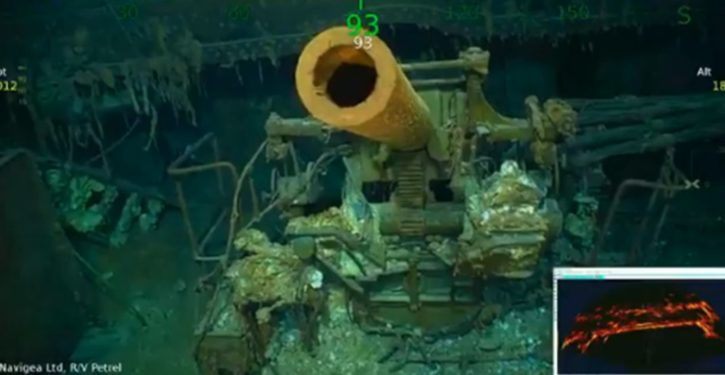 [Ed. – The story of Task Force 17 — USS Lexington and USS Yorktown — at the Battle of the Coral Sea in May 1942 is one every American should know.  Rest easy, Lady Lex, and Godspeed to all who sailed in her.]

Billionaire-turned-explorer Paul Allen has discovered the missing wreck of the World War II carrier USS Lexington (CV-2) at the bottom of the Coral Sea.

The crew of his personal research ship R/V Petrel found the missing ship two miles below the surface and about 500 miles off the eastern coast of Australia, he announced on Monday.

“To pay tribute to the USS Lexington and the brave men that served on her is an honor,” Allen said in a statement. …

Video footages and photos from the wreck show well-preserved examples of the ships’ eight-inch and anti-aircraft guns. Aircraft that were abandoned aboard when the carrier was evacuated are also in excellent condition.