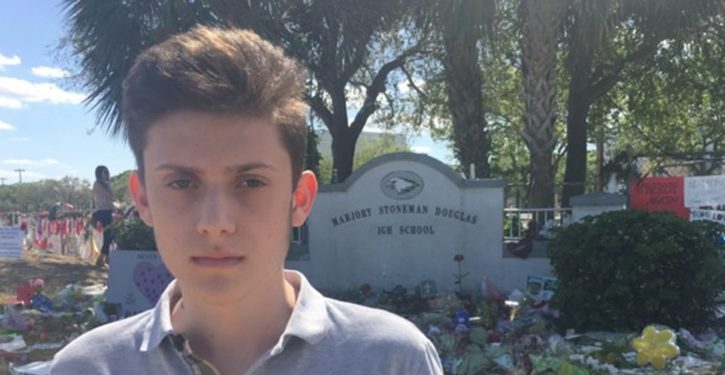 [Kyle] Kashuv is just as much a Parkland survivor as now-familiar names like David Hogg and Cameron Kasky, yet his views have only garnered limited attention.

I ask him why he thinks that’s the case. “I don’t know,” he says, hesitantly. “Maybe because I don’t use inflammatory language.  I speak calmly and logically without much emotion. I don’t necessarily make the very best headline.” …

“I’m a very strong Second Amendment supporter and I will continue to be throughout this entire campaign.” he tells me.  “As of right now, my main goal is to meet with legislators and represent to them that there are big Second Amendment supporters in our community. Through this entire thing, my number one concern has been making sure that the rights of innocent Americans aren’t infringed upon.”  He says that when he visited the state capitol to talk to lawmakers shortly after the tragedy, he consistently asked for guarantees that the constitutional rights of law-abiding gun owners wouldn’t be attacked or abridged.  He’s waded into this debate “kind of reluctantly,” he admits, observing that at some point he realized that he was one of the few conservatives in his school who were speaking up in public. “It’s not even by my choosing, it’s just come to that,” he remarks. “I feel somewhat obligated to do this because the other half of America needs to be heard.  I’m doing this because I have to.”

Dating scene tough for Republicans in Democrat-dominated D.C.
Next Post
UCLA prof explains that microaggressions can be ‘lethal’