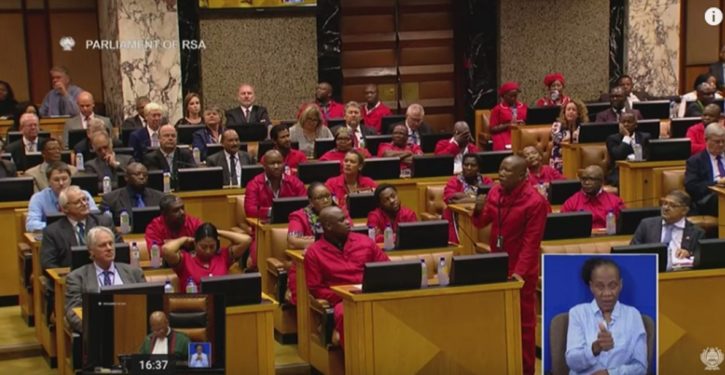 Parliament of the Republic of South Africa. (Image: Screen grab of RSA video, YouTube via CNSNews)

More than 12,000 people have signed a petition asking President Donald Trump to let white people in South Africa emigrate to the U.S. amid a vote by the country’s parliament favoring a motion that could see South Africa’s constitution amended to allow for land to be stripped from owners without any compensation.

The motion, which will still need the approval of the South African Parliament’s Constitutional Review Committee before an amendment can even be drafted, has once again stoked fears among the country’s white farmers of a violent and disastrous land redistribution akin to that which crippled Zimbabwe in the 2000s.

The online petition calls on Trump to “take the steps necessary to initiate an emergency immigration plan allowing white Boers to come to the United States.” Boer is the term used to describe South Africans of Dutch, German or Huguenot descent, who are also commonly referred to as Afrikaners.

Lindsey Graham: War with North Korea would be ‘worth it’ in the long run
Next Post
Dick’s employee resigns, says he refuses to support ‘liberal policies’