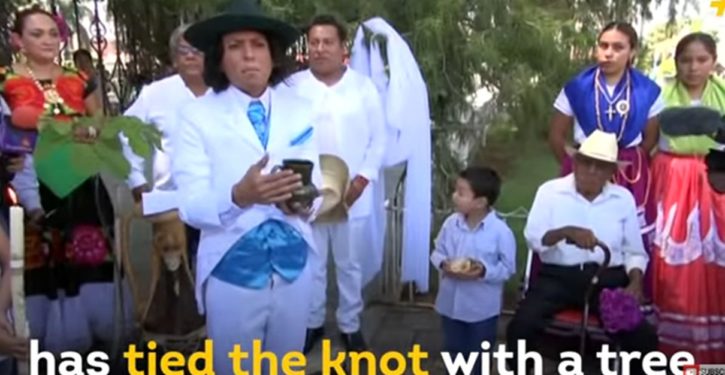 [Ed. – A couple of men seem to have taken vows — including the event’s sponsor, Peruvian activist Ricardo Torres (now reportedly wed to his eighth arboreal bride) — but the human contingent was mostly women, going by the videos and images.  Although the video illustration from the 2016 ceremony shows Torres toting around the suspiciously young tree on his right (in the feature image), the captioned explanation says he married a “2,000-year-old cypress.”  (Which would be some kind of cougar.)]

Photos from the mass ceremony show brides dressed in white hug and kiss their beloved trunks as they pledge their devotion forever.

There was even a bouquet to throw – though presumably one of the humans caught it, rather than a guest from the trees’ side of the family. …

The wedding was designed to draw attention to the problem of illegal logging in San Jacinto Amilpas, Oaxaca state.

‘Marry a tree’ began as a ritual of giving thanks to Mother Earth carried out by the organisation ‘Bedani’, and later gave way to a symbolic wedding based on Inca customs where women and men ‘marry’ trees in a rite led by Peruvian actor and environmentalist Richard Torres.

Italian town bakes huge cake to celebrate removal of migrants
Next Post
Reminder: Massive foreign spending (by Soros) seems to have worked – for Trudeau in Canada