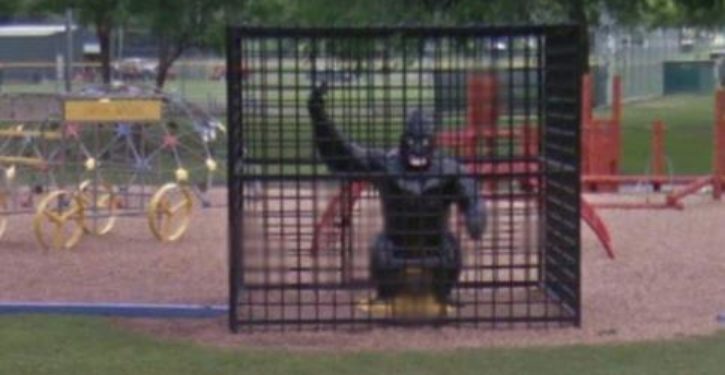 [Ed. – Man, talk about steering into the skid!]

A statue of a gorilla in a community playground was removed because some people found the children’s plaything racially insensitive.

The gorilla, which had stood for 19 years in the playground in Corsicana, Texas, was removed by city workers.

“We can understand this, because we have an obligation to listen to all our citizens, to determine what is offensive and not, especially in public places,” said Corsicana Mayor Don Denbow, CBS-DFW reported.

“Denbow saw an uptick in complaints about the playground primate during the last few weeks. There were more and more phone calls, and personal discussions, and he, the city manager and a city council member, decided it needed to come down,” the TV station said.

The mayor said in a statement: “The City of Corsicana has recently made the decision to remove a display in Community Park,” the letter stated. “It was determined to be potentially racially insensitive. This was brought to our attention by a few citizens. The circumstances were evaluated and determined to be valid.”…

Hillary says we must ‘address’ role of social media before midterms to prevent ‘it’ from happening again
Next Post
Lindsey Graham: War with North Korea would be ‘worth it’ in the long run