There is a lot of noise lately, and less signal, about the now debunked “Trump colluded with Russia” narrative. After special counsel Robert Mueller indicted 13 Russians for trolling Americans during the 2016 election, Democrats and various malcontents are in a tizzy to move their narrative goalposts.

With this environment, any reasonable person would know to be concerned about the security of the election process. Yet with everything President Obama knew about foreign interests and meddling, less than one month before the election, he felt compelled to mock and ridicule Mr. Trump and his concerns.

During a Rose Garden press conference on Oct. 18, 2016, with the visiting Italian prime minister, Politico reported this about Mr. Obama’s comments, “‘There is no serious person out there who would suggest somehow that you could even rig America’s elections, in part because they’re so decentralized and the numbers of votes involved,’ Obama said. ‘There’s no evidence that that has happened in the past or that there are instances in which that will happen this time,’ he continued. ‘And so, I’d advise Mr. Trump to stop whining and go try to make his case to get votes.’ “ 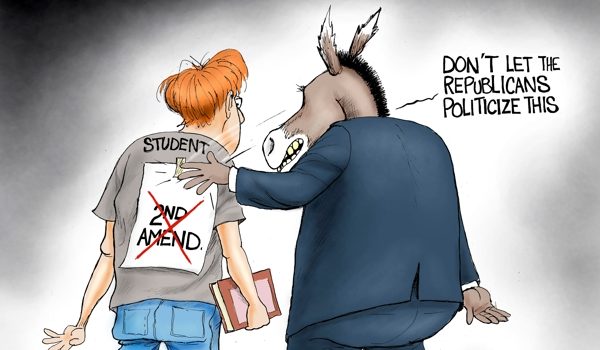 Cartoon of the Day: Soft targets
Next Post
CNN’s Chris Cuomo pushes phony story about buying AR-15 without ID, then lies about it