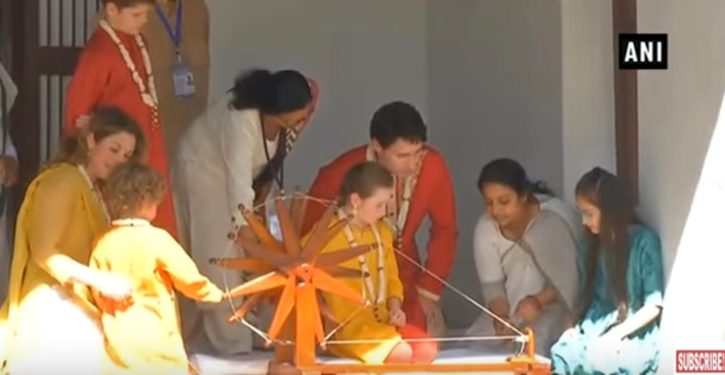 Trudeau family in one of several sets of matching mufti, visiting ashram in India on 19 Feb 2018. (Image: Screen grab of ANI video, YouTube)

[Ed. – Canadians speculate the trip is at least partly intended to generate photo ops that impress a domestic Sikh constituency.  Apparently PM Trudeau has been trundling around India without having met with Indian PM Modi, but nevertheless holding the odd town hall gathering with Indians. I can understand the Indian government finding this distinctly peculiar.  Not to mention the Canadian taxpayer, with the whole Trudeau family in tow along with six Cabinet ministers.]

As Canadian Prime Minister Justin Trudeau continues his eight-day visit to India, the fact that his schedule includes just half-a-day of official engagements in New Delhi is being described as “unusual” by veteran diplomats and criticised by a Canadian watchdog.

A veteran Indian diplomat said in his long experience with bilateral visits, he had never experienced a trip of this nature, where the visiting dignitary spent so little time in official engagements with counterparts in the Indian government.

In addition, he said, it was equally surprising that six cabinet ministers accompanying Trudeau had scant official engagements, except for foreign minister Chrystia Freeland, who will confer with external affairs minister Sushma Swaraj ahead of the meeting between the prime ministers in New Delhi on February 23.

The diplomat spoke on condition of anonymity since he did not want to appear “churlish”.