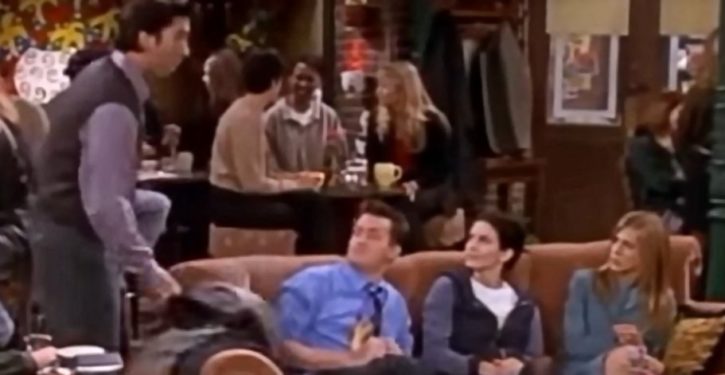 Focus of evil in the modern world? (Image: Screen grab of YouTube video)

[Ed. – Funny thing, 10 or 12 years ago, maybe more (I’m too lazy to look it up), Ben Shapiro wrote a book about the relentless leftism of Hollywood’s TV scripting, and Friends was the focus of one of his chapters.  Friends was avant-garde P.C. in its day.  Now it sends snowflakes scurrying for their safe spaces.]

Having been given a new life on Netflix two decades after it debuted on NBC in 1994, Friends is being seen by a suspicious new generation with beady new eyes. …

“Millennials watching Friends on Netflix shocked by storylines,” ran the headline of a piece by Ilana Kaplan, writing from New York for the Independent. Examples of the kinds of things Millennials apparently find shocking: “New audiences claimed that Rachel would have been fired for sexual harassment because she hires an assistant who isn’t qualified for the position because she wants to date him.” Fat jokes — “Some girl ate Monica!” cried Joey (Matt LeBlanc) — are also now out of bounds, the Independent huffs.

Working up a Cory Booker level of manufactured anger, Buzzfeed calls Friends “F***ing Infuriating,” citing among other transgressions the episode where Ross is taken aback when his son plays with a Barbie doll, the way everyone mocks Joey when he likes girly stuff…